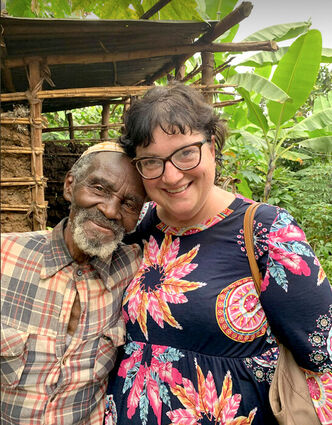 Ishmael was 86 years old when I met him. He was a practicing Muslim and the person in his village who prepared and slaughtered animals for Islamic rituals. He came to a free vision clinic I was conducting. Typically, I would never begin a relationship by talking about Jesus to a Muslim. I passionately believe that you must build relationships strong enough to hold the gospel. But Ishmael advanced age, and the fact that Uganda's life expectancy is less than 60 years, I felt I had an obligation to say something. So, I asked him, "Who is Jesus to you?" He replied that Jesus was an outstanding teacher. I told him I agreed but that I knew Him to be so much more. I explained that he was the Son of God and our Savior.

With a smirk on his face, Ishmael replied, "I know your Bible says that, but it is wrong." Not knowing what to say in response to his reply, I told the translator to say I would be praying for him every day until he believed what I knew to be true about Jesus. My words were either translated incorrectly or misunderstood because he replied, "Tell her she has my permission to pray for me." With a similar smirk to Ishmael's earlier one, I replied, "I wasn't asking for permission. I WILL be praying for you until you believe that Jesus Christ is your Lord and Savior." With a twinkle in his eye, he smiled at me, took his glasses, and left.

We couldn't finish the clinic that day, so we announced a future date of return. Arriving back a few weeks later, Ishmael was at the front of the line. He was not wearing his glasses, so I assumed he either broke them or lost them. Through the translator, I asked why he was there. His reply surprised me. He had come to find out if I was still praying for him. I assured him I was. Then he gave me a beautiful hand-woven purse made from local grasses with homemade mud beads decorating it. Of the thousands of people, I had given glasses to, he was the first to bring me a gift of thanks. A new friendship was born.

Visiting Ishmael has become a part of my routine. I see him at least twice a year, sometimes more often. Every time we meet, we discuss Jesus and Christianity. He probably never attended school a day in his life, but he is one of the most intelligent men I know. He challenges me regularly. After about three and a half years, I said that Jesus was God, made flesh, who came to dwell among us. (John 1:14) When I said those words, his eyes opened wide, and he said, "No one has ever explained Jesus to me like that before!" Sadly, we ended that visit without a profession of faith.

Four months later, I made plans to see my dear friend again. My translator said that Ishmael was not well enough to meet me at our usual place. Instead, I went to where Ishmael was. When I got there, he looked very frail and sick. He was seated and did not get up to greet me. He was coughing, and we worried he had tuberculosis.

We addressed his medical needs, and then I began my usual conversation with him. I began recapping our discussions, starting with the statement from John 1:14 that had gotten his attention the last time. Before I could finish, he interrupted me and said, "You don't have to continue. I now believe what you have been telling me about Jesus." I was elated but feared he was telling me what he knew I wanted to hear. Afterall, we had become close friends. So, I asked him for some reassurance that he truly knew Christ as his savior.

Every time I visit Ishmael, I bring him groceries from town. Items such as bread, soap, sugar, tea, and cooking oil that he cannot get in the village. After I asked him to assure me of his salvation, he began asking me questions. First, he asked, "Are these my groceries?" YES. "Are they free, or do I need to pay you for them?" FREE. "Will you take them with you when you go?" NO. They are yours to keep. Then he said the sweetest words, "I have accepted Christ in my heart. It is a free gift, and not you or anyone can take it away from me." I was overjoyed. We prayed together, and then I prepared to leave.

Although he was sick, he stood up and insisted on walking me back to my vehicle. When we reached the car, he said something to my translator, and the translator began crying. Surprised, I asked, "What did he say?" Ishmael had told me that he loved me. For many reasons, expressing love is unusual in that culture. It further assured me that Christ had transformed his heart.

At the time of this writing, Ishmael is 94 years old. We have built him a permanent home where he can live in peace and grow some food. His grandson lives with him and helps him. We recently had all his teeth pulled as they were rotting and infected. He has been gaining weight since they've been removed. I send two spiritual sons regularly to check on him, bring him medicine and food.

I don't know how much longer he will be with us, but I no longer worry about it. I know I will see him in heaven one day. One day he told me that he couldn't wait for us to both reach heaven so we could talk without a translator.

I'm looking forward to that day, too!