Grain handling safety practices are a matter of life and death. 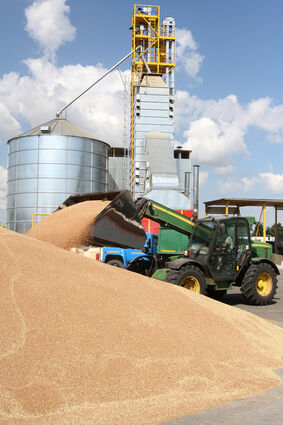 Working with any kind of grain – especially when it’s stored in a bin – poses life-threatening hazards.

Understanding those hazards and knowing how to protect yourself from harm helps prevent serious injury or death.

Bob Aherin, Ph.D. and Professor Emeritus, University of Illinois, Agricultural Safety and Health Program and AgrAbility Unlimited Program, says becoming trapped in flowing grain one of the most hazardous aspects of grain handling.

“Getting caught in a grain auger as you move grain from a wagon to the bin or becoming entangled in a sweep auger on a bin floor are also involved in grain handling incidents,” Aherin says. “Lack of adequate guards on augers and failing to cut power to the sweep auger when you’re inside the bin can lead to these kinds of accidents.”

Additional risks related to working around grain bins include falling off a bin, either from the bin roof or from a ladder on the bin. Because bins and ladders are typically made of steel, weather conditions such as ice, rain, or fog can increase the risk of a slip, trip or fall from a ladder or bin roof.

Flowing grain produces dust, which includes mold spores and other organic particles that can trigger allergic reactions when they’re inhaled. Potentially, inhaling this type of dust, whether it happens on a regular basis or over a long period of time, can lead to permanent lung damage and/or chronic lung disease.

“Toxic dust particles can be less than one micron (one one-thousandth of a millimeter) in size,” Aherin says. “You won’t even see it. That’s why it’s critical to use appropriate respirators when working with grain.”

Since 2018, grain bin deaths have been trending upward. The U.S. Department of Agriculture reported that, from 2018 to 2019, instances of grain entrapment rose by 27%. The number of grain-related deaths rose by 53% during that same period.

During harvest season, the number of grain bin deaths tends to increase. Aherin says understanding the hazards and taking every precaution to avoid grain handling incidents are a life-and-death matter.

“One of the main issues related to grain entrapment occurs when the grain in the bin is out of conditions and it’s bridged inside the bin,” Aherin says. “A small percentage of farms have a grain storage system that features tools to break up the grain without entering the bin. But anytime a person enters a bin when the auger is running in an attempt to break up the grain, the risk of serious injury or death is high.”

No one should ever enter a grain bin without having completed the following safety steps:

1. De-energize and disconnect, lockout and tag, or block off all mechanical, electrical, hydraulic and pneumatic equipment, especially grain-moving equipment in the bin.

2. Do not empty or fill the bin while someone is inside it.

3. Put on a full-body safety harness.

4. Have a secure attachment to a lifeline that is positioned and of sufficient length to prevent a worker from sinking further than waist-deep in grain.

5. Have an observer outside the bin who is prepared to call for emergency help if necessary.

6. Ensure that communication between the person inside the bin and the observer is maintained.

7. Prior to entering the bin, test the oxygen content and the presence of hazardous gas.

8. Resolve any atmospheric conditions before entering the bin.

“There have been instances when someone was using a tool, a wrench or a rod, inside a bin and dropped it,” Aherin says. “When they attempted to retrieve the tool, the grain broke loose and they were caught up in that flow.”

Anyone caught in a flow of grain has between two and four seconds before they are entrapped up to their knees. The pressure of the grain against a body is so great that it’s impossible to pull yourself out of it. It may also not be possible for a standby observer to rescue someone who’s trapped.

“About 60% of the time, people entrapped in grain do not survive,” Aherin says. “For one thing, in summer months, temperatures inside a bin can be 120 to 130 degrees. Even if you’re in the best of health, the stress on your body from this kind of trauma is intense. It’s common for farmers to be overweight, some have heart conditions. Just the pressure of the grain against your body and the chest cavity greatly increase the risk of death in these circumstances.”

Aherin explains that working below the line of grain on the side of a bin is extremely dangerous because there’s no way to know if the grain is bridged or if there’s a gap in it. Even if grain seems to be caked on top and forming a hard surface, it’s never safe to walk across it.

Aherin recommends following safety procedures outlined by the Occupational Safety and Health Administration (OSHA) for removing small amounts of grain from a bin. Sweep augers and grain augers present their own kinds of life-threatening hazards.

“Keeping augers shut down while you’re inside the bin is the safest way to work,” Aherin says. “Don’t attempt to empty a bin unless an observer is standing by to summon help in an emergency. And maintain communication with them during the entire time you’re in the bin.”

Grain bin stairs rather than ladders provide a much safer way to scale a bin. Stairways should be at least 22 inches wide with a landing platform for every 12 feet of rise. Steps should angle no more than 50 degrees and no less than 30 degrees. Step risers should be uniform and include a slip-resistant surface.

Aherin notes that, just because taking shortcuts with handling grain results in escaping an accident or injury once or twice, reinforcing any risky behavior is just practicing for disaster.

“Data documented by the grain storage industry indicate that farmers are storing grain for longer periods of time in large bins,” Aherin says. “Grain production in the U.S. has doubled over the last 20 years. All these data indicate that farmers are experiencing enhanced exposure to grain storage. Reduce your chance of injury or death by eliminating any unnecessary risk related to entering a grain bin. Understand what your risks are and know the appropriate way to deal with them. Work safely.”

Funding for this educational article comes from the Central States Center for Agricultural Safety and Health and the University of Nebraska Medical Center.