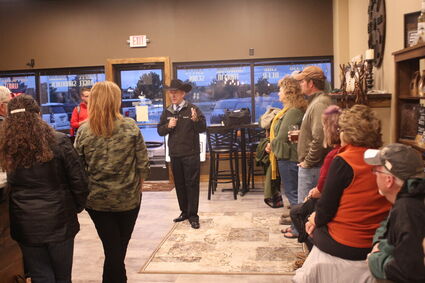 Herbster first stopped in Sidney as a gubernatorial candidate in May.

He was in Sidney Tuesday for a meet and greet hour at Beans and Steams Coffee House. He said he has had the opportunity to travel east to west, north to south in the state, just to listen to concerns of citizens of Nebraska. Concerns include the Critical Race Theory (CRT) and the chaotic disaster occurring at the U.S. Southern border.

“Everything the Biden Administration has touched has been a disaster,” Herbster said.

Herbster said he visited the border, knowing it is serious, but not knowing how serious, he said. He said border agents told him an estimated $400 million in illegal drugs are moved into the U.S. by cartels.

He said the issue is a soft border, laws not being enforced.

“I'm only tough on illegal immigration,” he said.

He said after meeting with border agents, the border issue should be addressed from three points: 1) finish the wall, where the wall works. He said if a wall is not environmentally viable, it shouldn't be built there, but there are miles where the wall needs built; 2) stop the “catch and release” procedure. He said the belief that people who cross the border illegally will keep a court date doesn't make sense. 3) “Put back,” the stay in Mexico approached used by President Trump. He said people should stay in Mexico until granted permission to enter the country legally.

Just prior to taking the microphone Tuesday evening, he was informed former President Donald J. Trump had endorsed him as the next Nebraska governor. In 2015, President Trump appointed Herbster as the chairman of the Agriculture and Rural Advisory Committee.

“My good friend who I've supported from Day 1 has endorsed me as governor,” Herbster said.

Herbster introduced himself as a farmer and rancher who has always been close to livestock. He said he has raised cattle, dairy cattle, hogs and horses. He told of his first purchases, days old when his grandfather bought a few head of cattle in his name.

Herbster said Nebraska is his priority.

He said he speaks with South Dakota Governor Christi Noem frequently, noting she is doing what it takes to bring people to her state. He said she is doing nothing Nebraska can't do.

“Our tax system built in the 60s will not work today,” he said.

On the charleswherbsterfornebraska.com website, he says “...As a businessman, farmer and rancher, I feel the weight that has been placed on us.” He says it is time for the state to overhaul the tax system.