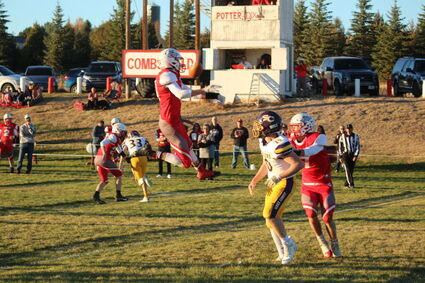 The powerhouse Potter-Dix Coyote Football team improved to 9-and-0 on the season with a 54-to-0 shellacking of the visiting Sioux County Warriors in the first round of the D6 Playoffs Friday afternoon in Potter.

Sioux County came into the game shorthanded due to injuries, and tried a few different looks to hopefully slow down the Coyotes, but to no avail as the Coyotes scored on seven of their first nine possessions of the game. After electing to receive after winning the coin toss, Sioux County hit disaster as the Coyotes' tried an onside kick and were successful recovering the ball. Four plays later, junior standout Luke Kasten found senior Jared Anton wide open in the endzone, and connected with a 33 yard pass to start the scoring.

Sioux County tried to shorten the game by taking as much time off the clock as possible on offense, but were unable to gain a first down the entire first half. Anton scored on the next possession on a 39 yard run, and was followed by two more touchdown runs by Luke Kasten for 37 and eight yards. Sophomore quarterback Brayden Kasten threw for three touchdowns in the game, two to junior Zachary Rotert and one to senior Thomas Muldoon. After opening a 30-to-0 lead in the first quarter, the Coyotes ended the half up 54-to-0.

The Coyote defense did not give the Warriors any room to operate, stopping runs in the backfield and thwarting passes with rushes by Luke Kasten and seniors Thomas Muldoon and Jared Anton. Anton led the defense with nine total tackles and three tackles for loss. Muldoon and Anton each had an interception, and Brayden Kasten recovered a fumble in the victory. Brayden Kasten completed three of four passes for 44 yards and three touchdowns, while Luke Kasten rushed nine times for 135 yards and two touchdowns.

Potter-Dix next hosts Parkview Christian out of Lincoln on Friday at 1 p.m. at Combs Field. The Patriots are 8-and-2 on the year. It is the Patriots' second season playing in Class D6.