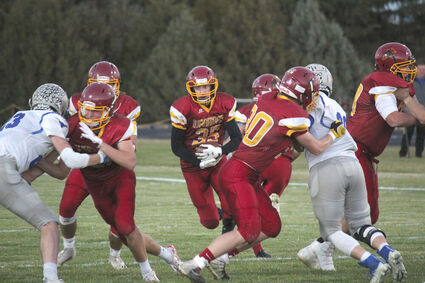 Leyton's Warrior Football team had their season come to an end Friday afternoon in Osceola, as their defense could not contain Osceola's Isaiah Zelasny, who's eight touchdown rushes powered the Bulldogs to a 54-to-28 win in the second round of the the D2 playoffs.

It was Leyton's first trip to the second round of the playoffs since 2007, and the Warriors came into the game relatively healthy at 7-and-2 and set to take on the 8-and-1 Bulldogs. The weather was a perfect 60 degrees with a slight breeze at kickoff, and Leyton had a substantial group of fans make the trip to Osceola to cheer on their Warriors.

The Warriors deferred and elected to kick off to start the game, and on the second play of scrimmage got their first dose of Osceola junior quarterback Isaiah Zelasney, as he used a play action pass to freeze the Warrior defense, then pulled the ball down, cut through the middles, and accelerated through the Leyton defense for a 54 yard touchdown run for a quick 6-to-0 lead.

Leyton was able to pick up a first down on their first possession, but had their drive ended on an interception by Osceola on their own 20 yard line. The Bulldogs mounted a good drive but turned the ball over on downs when the Warrior defense swarmed Zelasney on a fourth down run and stopped him short of the line to gain. Again Leyton was able to pick up a first down, but was forced to punt to end their drive. On Osceola's next drive, a second down pass was intercepted by Leyton senior Kole Bush, which translated into a good drive for the Warriors, ending with a 12 yard touchdown run up the middle by Bush to tie the score at 6-to-6.

Osceola again was stopped cold by the Leyton defense, forcing a punt that drove Leyton back to their own 5 yard line. Leyton mounted a drive and gained a first down, but were then stopped and punted on fourth down. Zelasney fielded the kick, made a cut to the right, then sprinted down the sideline for a 50 yard touchdown, giving the Bulldogs a 12-to-6 lead.

Osceola kicked the ball out bounds twice on the ensuing kickoff, and Leyton Head Coach Glen Lipska opted to take the penalties and have the Bulldogs re-kick each time. The strategy backfired as the third kick was boomed all the way back to the Leyton goal line, and returned to the 16. Leyton again was able to pick up a first down, but stalled and punted the ball back to the Bulldogs' 17 yard line. On the first play from scrimmage, Zelasney agains blasted up the middle of the Leyton defense and got past the secondary, and cruised 53 yards for a touchdown to make the score 18-to-6.

Leyton started their next drive on their 15, but could not gain a first down and tried a fake punt on fourth down. Sophomore Peyton Abbott was stopped short, and Leyton turned the ball over on downs on their own 21 yard line. Osceola chewed up the clock with a 10 play drive that ended with a Zelasney one yard touchdown plunge to move the score to 26-to-6 with seconds remaining in the half.

Leyton had a good spark to end the first half, when junior Justin Ernest returned the kickoff all the way back for a touchdown to narrow the lead to 14-to-26, and grab some momentum going into the second half. That momentum dissipated as the Warriors fumbled the kickoff to start the second half, and Zelasney scored on the very next play, a 22 yard run to increase the lead 34-to-14. The Bulldogs then scored 20 unanswered points on 41 yard and 59 yard runs by Zelasney, to put the game away for the Bulldogs. Osceola finished with 403 yards rushing on the day, with all of their touchdowns scored by Zelasney.

Peyton Abbott led the Warriors offense with 139 yards rushing on 23 attempts with one touchdown. Senior Kole Bush had 16 carries for 49 yards and a touchdown in the loss. Senior Scout Gamble went 9-for-20 in the air for 108 yards and one touchdown, caught by senior Mason Reimers. Justin Ernest intercepted his 10th pass of the season to lead all of Class D2.

Leyton's season ends with a 7-and-3 mark, their second winning season in a row after not having a winning season since the 2015 campaign. They also reached the second round of the playoffs for the first time since 2007. Osceola next takes on number one ranked Sandhills/Thedford in the quarterfinal round of the Class D2 playoffs.