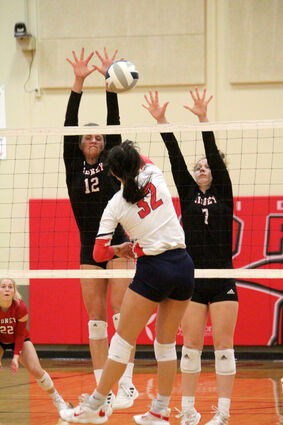 But first, the Lady Raiders had to get through their Subdistrict Tournament against familiar opponents, at home at Sidney High School. Starting on Tuesday, number 1 seed Sidney matched up with number 4 seed Gering, which came into the match with a record of 13-and-20. The 19-and-14 Lady Raiders had already beaten the Lady Bulldogs twice earlier in the season, but the Gering squad features a good group of athletes with length and good hitting ability, so Sidney would have their work cut out for them to advance.

The first set went all Sidney's way, building a big lead early and having the ball fall their way at every chance possible. The Gering squad battled, but seemed a step behind the hosts and just could not get their rhythm established. Sidney took the first set 25-to-16, but upped their tempo and started getting in system consistently, with proper sets and big swings at the net. Gering was able to outlast Sidney and take the second set 25-to—23, and the dogfight was on.

Sidney again started fast in the third set and minimized their errors, with good sets by senior Brynna Ross and junior Reese Riddle throughout the set, giving the Lady Raiders momentum and leading to a 25-to-20 third set victory. But Gering wasn't done, and battled back hard in the fourth set, again getting into a good rhythm and making timely blocks to pull away and take a 25-to-13 fourth set victory, and force a fifth and deciding set. In the final set, Sidney paced with Gering until they were able to string together a few points and open a lead, and continued on to a 15-to-12 victory, and a 3-to-2 match victory.

Sidney outhit the Lady Bulldogs 66-to-45 in the win, and had three hitter with double digit kills, led by senior Alecca Campbell with 26. Junior Rheagan Stanley had an astounding 36 digs, a school record, while also breaking the school record for digs in a season with 557. Ross had 33 and Riddle had 29 assists in the victory. After the match, the number 2 seeded Alliance team matched up with the number 3 seed Scottsbluff, with the winner advancing to face Sidney in the finals on Wednesday. The Lady Bearcats had faced Alliance twice in the season, and lost both matches in straight sets, but had two strong wins against Alliance and Torrington coming into the Subdistricts, and were playing their best volleyball of the season. After dropping the first set 25-to-23, the Lady Bearcats were able to come back and take three straight sets from Alliance for a 3-to-1 match victory, and earned their place against Sidney in the finals.

The Lady Raiders had already beaten the 17-and-19 Lady Bearcats twice in the season, both times in straight sets, but started the match on Wednesday by falling far behind the visitors in the first set. The Sidney squad has had a habit of “taking a set off” through their matches, but not usually when starting a match. Sidney seemed a few steps behind and out of sync throughout the set, never consistently getting in system and missing their hitting opportunities, and fell in the first set 25-to-10. But Sidney was able to shake off the loss, and settled in nicely in the second set, opening a lead early. After pulling ahead to a 17-to-10 lead, Sidney's offense stalled , and Scottsbluff roared back to narrow the Sidney lead to 18-to-16. Sidney Head Coach Julie Smith called a time out and got her squad settled and focused, and they came out and pulled away, scoring five of the next seven points until sophomore Karsyn Leeling put the set away, getting up high with a tremendous block that Scottsbluff could not save for the 25-to-18 second set victory.

The third set started with the teams trading points, but Scottsbluff was able to pull away due to Sidney's multiple serving errors and hitting errors. Sidney was still in reach until Scottsbluff junior Payton Burda served up back-to-back Aces, which propelled the Lady Bearcats into getting the final points and a 25-to-20 third set victory. In the fourth set, again Sidney started strong out of the gate and built a lead, but this time Scottsbluff was only able to narrow the lead to two at 11-to-9 before Sidney poured it on to take the 25-to-16 set win, punctuated by freshman Kayla Westby's board-buckling spike kill for the 23rd point followed by another kill by Westby for the 24th point. The Sidney faithful amped up the energy with loud cheers and the stage was set for the final set.

Scottsbluff quickly grabbed the first two points, then Sidney tied it up at 2-to-2. Sidney battled hard and opened a three point lead at 8-to-5, but the Lady Bearcats fired back with a string of points and took a 10-to-8 lead. Again Smith called a time out and was able to refocus her squad, as they came out from the break to go on a 6-to-0 run and go up 14-to-10. Scottsbluff then scored to make it 14-to-11, but again Karsyn Leeling came up big with a kill into the backcourt that couldn't be handled, and Sidney took the 15-to-11 fifth set victory, and the 3-to2 match victory to earn the Subdistrict B-8 title. Sidney outhit Scottsbluff 44-to-28, and it was only Sidney errors that kept the match close. Leeling led the offense with 18 kills in the match.

The two tough matches Sidney had to endure turned out to foreshadow the District Championship matchup against the Adams Central Lady Patriots. A strong team with a group of tall hard-hitters, the Lady Patriots matched the Sidney squad point for point in the first set until Sidney was able to string together a group of kills and find open spots on the court to open a 24-to-17 lead, then put away the set 25-to-21.

The second set started with the teams matching each other's scoring until Adams opened a four point lead at 14-to-10. Sidney took a time out to regroup, then went on two runs to even the score at 20. Adams pulled away on the strength of three kills by junior Lauryn Scott, and took the second set 25-to-23.

The third set was another battle, as the teams matched scores until at 16-to-16, Adams went on a run and took the next five points. A series of controversial calls by the referees did not help with Lady Raiders' momentum, but Sidney eventually fought back with kills by junior Gabrielle Fortner and senior Alecca Campbell, but it was not enough and Adams took the third set 25-to-22. Sidney now had their backs against the wall, down 2-to-1, but it was a familiar place for the Lady Raiders after coming back with five set wins in both Subdistrict matches.

Sidney started the fifth set down, but rallied to tie and keep pace. But serving and hitting errors at the worst times possible plagued the Lady Raiders, and after tying the match at 9-to-9, Adams Central went on a 4-to-2 run to open a 13-to-11 lead. Another Sidney serving error moved the set to match point, and Adams was able to outlast Sidney and get the last point for the 15-to-11, 3-to-2 match victory.

Sophomore Karsyn Leeling led Sidney with 18 kills and four blocks, and emerged this season as a team leader for Sidney. Senior Alecca Campbell ended her high school volleyball career with 14 kills and four blocks in the loss. Junior Libero Rheagan Stanley had 18 digs in the match, moving her total for the season to 609, a Sidney school record. Freshman Kayla Westby had seven kills in the match, and emerged in the latter half of the season as a valuable, hard-hitting offensive player that will be a part of the core of the Sidney team for years to come. Although the Lady Raiders did not make it the State Tournament this year, with all of the adjustments and younger players added to the varsity roster, the season was definitely a success and this group of young athletes should be favorites in the Panhandle for the next few years.