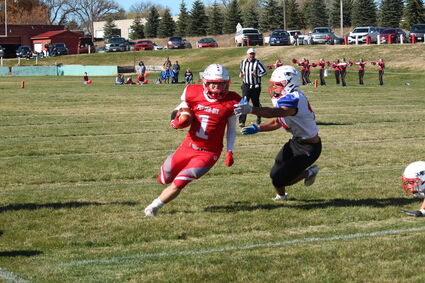 This victory pushes the Coyotes' record to 10-and-0 on the season and marks the first time the Potter-Dix team has advanced to the semi-final round of the playoffs.

On an sunshine soaked afternoon with 70 degree weather and a slight breeze, the teams squared off in front of a bring crowd, and impressive number of Parkview Christian fans that made the five and a half hour trip out from Lincoln. The Patriots came into the game with a 7-and-2 record, and big win over Silver Lake to move them into the next playoff round, an impressive feat for a team only two years into 6-Man play.

The Patriots received the kickoff to start the game, and had trouble moving the ball with the swarming Coyote defense forcing a turnover on downs to start the game. The Potter-Dix offense quickly went to work, quickly moving down the field and then scoring on junior Luke Kasten's pass to sophomore Caden McConnell to give the home team a 7-to-0 lead. On the Patriots' next possession, they were able to manage a first down, then were forced to punt on fourth down and 15. Pottter-Dix again quickly moved the ball down the field until junior Zach Rotert fumbled after making a catch in Patriots' territory. Rotert quickly made up for his mistake by sacking Parkview Christian junior Elijah Colbert quarterback deep in Patriots' territory, leading to a punt attempt the Coyotes' disrupted, tackling the punter on the Patriots' two yard line. Potter-Dix capitalized with a short touchdown run by senior Jared Anton, and the Coyotes were up 15-to-0 as the first quarter wound down.

It seemed as if this game was going to go the way of nearly every game the Coyotes have played this year, with Potter-Dix building an insurmountable lead early, and the second half played with a running clock and the opposing team just trying to make any kind of positive play. With the exception of an away contest against Arthur County at the end of September, the Coyotes really have not had a team challenge them for all four quarters of a game. This would change on Parkview Christian's next possession as their star running back, junior Chandler Page, broke free on a thrid and five, shaking tackles and changing directions on a 24 yard touchdown jaunt that got the Patriots on the scoreboard, narrowing the Potter-Dix lead to 15-to-6.

Potter-Dix fired back with two big passes to senior wide receiver Thomas Muldoon, followed by a touchdown pass by Luke Kasten to Zach Rotert, and Potter-Dix widened their lead to 21-to-6. But Parkview Christian responded on their next drive, when Colbert threw a short slant pass to junior Brayden Ulrich who found a seam in the Coyotes' defense and took the ball 54 yards for a touchdown to again narrow the lead to 21-to-12. But the Patriots' defense could not stop the Coyotes on the next possession, as Luke Kasten connected with Anton on a fourth and seven play for 32 yards, then Kasten followed up with a 17 yard touchdown gallop to extend the lead to 29-to-12 with 3:30 left in the half.

Again the Patriots surprised the Coyotes on their first play of their next drive, as Page took a hand off and blasted through the Coyote defense, running 61 yards for a touchdown and again narrowing the lead to 29-to-20. The Coyotes then scored as time wound down in the half to take a 37-to-20 lead, but Parkview Christian fired back with a last second score of their own to go into the halftime intermission down 37-to-28.

Potter-Dix showed they would not relent, on on the second half kickoff sophomore Brayden Kasten ran the ball back all the way for a touchdown to extend the Coyote lead 43-to-28. But the Patriots weren't ready to fold up the tent and give up, as they took their next possession down the field and scored on a seven yard touchdown by Page, narrowing the lead to 43-to-34.

The Patriots scored no points on their first three possessions of the game, but then scored on their next six possessions to keep them in the game. But that would not be enough as the Coyotes defense stiffened and kept the Patriots out of the end zone for the rest of the contest.

After another big reception by Muldoon, Luke Kasten sprinted 20 yards for another touchdown to move the score to 49-to-34, and Muldoon followed up with an interception of Colbert on the Patriots' next possession. The Patriots stopped the Coyotes on their next drive as time wound down in the third quarter, but on their following possession, Colbert was picked off again, this time by senior Niko Koon, playing in his first game since missing the last four starts with an injury. Potter-Dix took their next possession and scored again on a six yard reception by Luke Kasten from Bryaden Kasten to go up 56-to-34.

The Patriots again were able to drive down the field, but were denied again as Muldoon made another interception, this time at the Coyote one yard line to stop a drive.

This was followed by Luke Kasten again sprinting for a touchdown, this time for 65 yards and the score was now 62-to-34. The Patriots again tried to mount a drive as time wore down, but Luke Kasten made another great play when he strip-sacked Colbert and Koon scooped up the ball and returned it 35 yards for the Coyotes final touchdown of the day.

The game ended with a final score of 70-to-34, and the Coyotes had punched their ticket to the semi-final round for the first time in school history.

Luke Kasten rushed for 185 yards on 17 carries, went 12-for-17 through the air for 119 yards and two touchdowns, and had five receptions for 54 yards. He scored six touchdowns in the victory, running for three, passing for two and catching one.

The Potter-Dix defense again came up big, forcing four turnovers. Thomas Muldoon finished with 68 yards receiving and two interceptions, and Niko Koon had an interception and a fumble return for a touchdown.

Parkview Christian was led by Chandler Page, who carried 21 times for 216 yards and three touchdowns, and also threw for a touchdown in the loss.

The Coyotes were able to answer a big question about their ability to play a “full game”. With so many lopsided victories this season, the Coyotes rarely had to go full speed in the second half in almost all of their contests. But the Parkview Christian team challenged them in the second and third quarters, and the Coyotes responded by turning their energy and effort up, and slammed the door an any chance the Patriots would come back in the game. As they move to the semi-finals, the Potter-Dix team knows it can go four quarters at full speed, and not get tired out by the fourth quarter. Last year, they lost in the quarter-final round to Cody-Kilgore, and the team felt they had been “out-physicaled” and “ran out of gas” in that contest. They made a commitment to not let that happen again, and immediately started their off-season training regime with workouts in the weight room and increasing their endurance. The effort paid off as they were able to put down a team that challenged them deeper into a game then they were used to, and were able to find another gear and put away their opponent.

Potter-Dix moves on to face #13 ranked Spalding Academy Shamrocks, and due to NSAA seeding formulas, the Coyotes will have to make the four and a half hour trip out to Spalding as the visitors. The Shamrocks beat Sterling by one point in the first round and then beat McCool Junction by seven points in the second round of the playoffs, and come into the semi-final round with a 9-and-1 record. The game is scheduled for a 1 p.m. MST kickoff on Friday November 12.