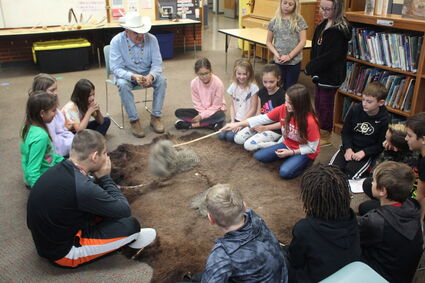 North Elementary School students again had the opportunity to have fun and learn life lessons the Lakota way recently when traditional Sicangu Lakota artist Steve Tamayo was a guest at the school.

He presented games that showed traditional play time coupled with life lessons. If you make a mistake, you pay the price. In a game, that might mean surrendering one of the game pieces. The games also explained Lakota legends about nature and how animals came to be as we see them today. 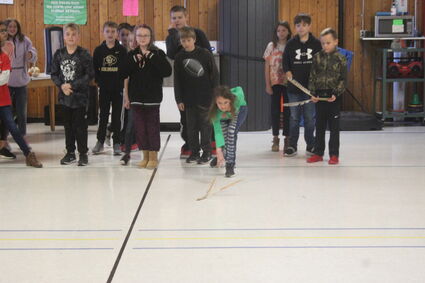 Steve Tamayo is a member of the Sicangu Lakota tribe and he reaches out to numerous students across the state to teach them about Native American culture, both past and present. He has been at North Elementary the last three years and was able to visit fourth grade again this year for an entire week. Tamayo's provides activities that include art and regalia making, playing Native American games, creating Native American crafts, and more.

Tamayo's family originates from the Rosebud Reservation. He is a regular consultant to the curatorial and conservation staff at the Smithsonian's National Museum of the American Indian. He has exhibited at The National Museum of the American Indian, in Washington, D.C., The Kaneko in Omaha, The Great Plains Museum in Lincoln, NE, the John G. Neihardt Center, and RNG Gallery in Council Bluffs, IA.

His honors include the 2014 NAC Governor’s Heritage Art Award for excellence in cultural artistic expression. He and Paul High Horse won the Omaha Entertainment and Arts Award for best two-person exhibition in 2015, and were again nominated in 2016.