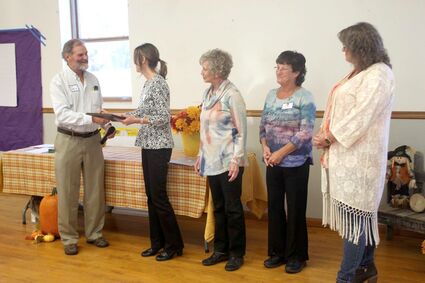 Saturday afternoon the village of  Lodgepole celebrated community. The celebration recognized an individual and his family whose support is taking the community into the future.

The Yanney family, E.K. Yanney specifically, is credited for support of the Lodgepole Community Foundation. The E.K. Yanney Foundation committed $20,000 to the community fund.

E.K. Yanney was known for banking in the Lodgepole community. But he was more than that. His family and friends also recall him for his involvement in the community. He is remembered for the constant presence of a bag of popcorn, and a tall glass of Pepsi, usually at the school gymnasium.

His daughter, Michelle Wehbi of North Dakota, said Yanney’s history starts before Lodgepole. He came to Lodgepole because of the bank. It didn’t take long before his banking duties were only part of his involvement in Lodgepole.

“He was involved in the community on many different levels,” Wehbi said.

She recalls him bringing treats to the schools on Teachers Day. In banking, the bank had set hours, but he was usually there before, and likely after. He would entertain community members who stopped by just for a cup of coffee, and gladly meet with customers before business hours, known for providing a line of credit and worrying about the paperwork later. She said he had such a way with people customers would move to another part of the state and retain their account in Lodgepole.

He also contributed to development in Kearney, and the Chadron State College Foundation.

After the presentation Saturday, an estimated 10 percent of the community met for a discussion of what they envision Lodgepole in the future. Concepts were unlimited, from a convention center to a laundromat.

As ideas were presented, they were grouped into recreation, community and business among others. The discussion started without the limits of funds or natural resources. It was about examining interests. From there the discussion included what do residents want the community to look like; will it continue to grow and expand, or do people prefer a smaller, more intimate community.

The mission of the Lodgepole Community Foundation is “to create a vibrant community by building partnerships and an endowment that addresses community needs and opportunities, ultimately improving the quality of all lives in the Lodgepole area.”

The Lodgepole Community Fund was formed to help preserve the community’s history and support a brighter future.