Holds Off Shamrock Surge for 39-38 Win 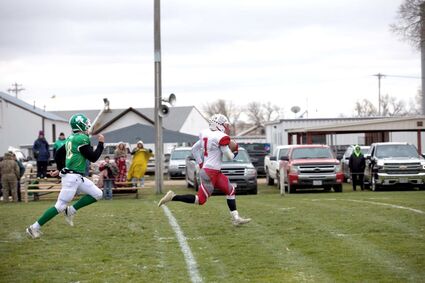 The number 1 ranked Potter-Dix Coyote Football team continued their historic season on Friday, holding off a late surge by the number 13 ranked Spalding Academy Shamrocks to punch their ticket to a State Championship game in Kearney, the first in the school's history. The Coyotes will face their biggest challenge of the year against the Cody-Kilgore Cowboys on Friday, November 19 at 6 p.m. MST at the Ron and Carol Cope Stadium at the University of Nebraska-Kearney.

The contest against Spalding Academy had very different conditions than the game last week against Parkview Christian in Potter, when an unusually warm day with a slight breeze provided perfect conditions for both teams. In Spalding, the game started with chilly temperatures and gusting 30 mph winds which affected both teams play through the contest. The Shamrocks deferred, and kicked off to Potter-Dix, and the Coyotes would have to drive into the wind in the first and third quarters.

After a failed onside kick resulted in a re-kick, the Coyotes started on their own 15 yard line. The Coyotes started with a big run by senior Jared Anton, breaking around the end and taking the ball deep into Shamrock territory. A personal foul call on the Shamrocks moved the ball even cloaser, and Potter-Dix had a first down on the 10 yard line.

On the first play, sophomore Brayden Kasten faked a handoff to junior Luke Kasten, then dished the ball off to Anton who was going in the opposite direction. The misdirection worked, and Anton jaunted 10 yards into the end zone, and after a successful pass to Anton for the extra point, the Coyotes had an early 7-to-0 lead.

Senior Thomas Muldoon then tried an onside kick, but it only bounced about six yards into the wind, and the Shamrocks started with great field position. Senior quarterback Dawson Murphy connected with senior Dan Diessner with a pass, and he ran the ball all the way down to the Potter-Dix 10 yard line. After a two yard gain on first, Luke Kasten broke into the backfield on second down causing a fumble that was picked up by Anton, who then ran the ball all the way back for a touchdown, and after a failed extra point, the Coyotes were up 13-to-0. Potter-Dix then caught a huge break on the ensuing kickoff when Muldoon again tried an onside kick, but this time he blasted the ball into the Shamrock front line, and the ball bounced off the Shamrock front line player and right back into Muldoon's hands. After a pass by Luke Kasten and two runs by Anton, the Coyotes struck again when Luke Kasten ran the ball, stiff-arming tacklers then cutting back to the right side of the field for a 23 yard touchdown run, moving the score to 19-to-0 after a failed extra point.

On the next possession, the Shamrocks were able to gain a first down, but the Coyote defense stiffened and forced a fourth down and six situation. The Shamrocks opted to pass, but again Luke Kasten put pressure on the quarterback who had to force a pass, which was intercepted by Brayden Kasten. The Coyotes were unable to mount a drive on their next possession, and punted into the wind to give the Shamrocks good field position at the Coyote 30 yard line. On a fourth down and seven, Murphy pulled the ball down and tried to run for the first down, but Potter-Dix senior Niko Koon was able to cut the angle and stop Murphy short for a turnover on downs. Potter-Dix took over and were able to drive the ball to mid-field when the first quarter ended.

The Coyotes took advantage of the wind at their back when Luke Kasten threw a 39 yard pass to Muldoon who caught the ball at the goal line then stepped into the end zone for the touchdown. A blocked extra point attempt made the score 25-to-0, and it looked like the game was turning into a rout.

The Shamrocks next possession went nowhere and ended on a turnover on downs, but the Coyotes did no better in their next possession and were forced to punt. The Shamrocks started on their own 36 yard line, and were finally able to break out a big play when Murphy ran the ball all the way down to the Potter-Dix 15. A few plays later Murphy found junior Luke Leslie in the end zone for a five yard touchdown pass, and a good extra point kick made the score 25-to-8. But the Coyotes fired right back, when Luke Kasten again broke out a big run and brought the ball down to the two yard line. Brayden Kasten then threw a two yard touchdown pass to Muldoon, moving the score to 31-to-8.

The Shamrocks had one last drive before the half ended, and managed to get the ball all they way down to the Coyote's nine yard line. On fourth and nine, Murphy threw a pass to Diessner at the goal line, but the ball was carried by the wind, forcing Diessner to reach behind and catch the ball while falling down. He landed just short of the goal line, was touched down, and the Coyotes went into the half up 31-to-8.

The third quarter opened with a big kickoff return by junior Braden Leslie that gave the Shamrocks great field position at the Coyotes' 23 yard line. A few plays later, Diessner ran about 10 yards, breaking tackles all the way, for a touchdown. After a successful extra point, the lead was narrowed to 31-to-16.

The teams exchanged punts over their next two possessions, and after a turnover on downs by the Coyotes with 3:30 left in the quarter, the Shamrocks took over. After moving the ball and gaining a first down, Murphy found Luke Leslie with a big 37 yard touchdown pass that moved the score to 31-to-24. Potter-Dix was clearly trying to drain as much clock as possible, to get them into the fourth quarter and the wind at their back. On fourth down of the Potter-Dix drive, the Shamrocks called a time out to force a punt into the wind. The Coyotes instead tried a fake punt, which resulted in a turnover on downs on the Potter-Dix 15 yard line.

Murphy was again able to cash in on a 12 yard touchdown run, but the extra point kick was no good, and the Shamrocks trailed by one at 31-to-30. Potter-Dix was able to drive and take time off the clock, but eventually turned the ball over on downs.

The Shamrocks mounted a drive, but sere stopped on fourth down when Niko Koon was able to knock away a pass by Dawson Murphy and get the ball back to the Coyotes. Potter-Dix started on the Shamrocks 15 yard line, and were able to score on a third down blast up the middle by Jared Anton. Thomas Muldoon then made the clutch extra point try, giving the Coyotes a 39-to-30 lead. With about out two minutes left in regulation, the Shamrocks capitalized on another big kickoff return by Braden Leslie, and two plays later Murphy tossed a 29 yard touchdown pass to Leslie. But the previous extra point miss loomed large, and even with a good conversion, the Shamrocks trailed by one at 39-to-38.

The Shamrocks tried a last-gasp onside kick, but Muldoon corralled the ball on the front line, and Potter-Dix took over. After taking their final time out, the Shamrocks could only watch as the Coyotes took knees on the remaining plays and ran out the clock to secure the 39-to-38 victory and their spot in the Sate Championship game.

Luke Kasten rushed for 130 yards and a touch down on 14 attempts, and went 3-for-7 in the air for 56 yards and a touchdown. Jared Anton had 89 yards on 15 attempts, and scored two touchdowns. Thomas Muldoon had two touchdowns as well as a clutch extra point and onside kick recovery late in the game. The Coyotes had only one penalty in the second half, and committed no turnovers in the game. They now move the State Championship game against Cody-Kilgore, who is also undefeated at 11-and-0. Last year the Cowboys traveled to Potter for the second round of the playoffs and over-matched the Coyotes, winning a lopsided 42-to-8 contest to knock Potter-Dix out of the playoffs. The Coyotes look to return the favor on Friday, and earn their first State Title in Football.