The Hidden Prairie within Morrill Hall 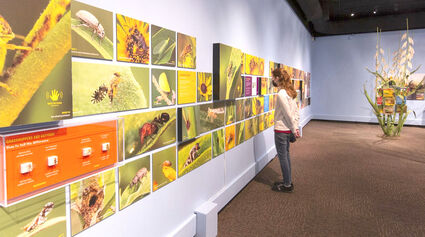 Chris Helzer, a local nature photographer and Nebraska director of science at The Nature Conservancy, was looking for a new way to tell people why prairies are interesting and important when he came up with the idea of proving the diversity of prairies on a smaller scale. And so the project “Hidden Prairie” was born.

Helzer’s project originally started as a book that features images and stories about the species he discovered in a square meter over a year in Lincoln Creek Prairie in Aurora, close to where Helzer lives. “Hidden Prairie” was published in May of 2020 but has since extended beyond the bounds of the pages. On Oct. 16, the Hidden Prairie debuted as an exhibit at the Morrill Hall in Lincoln and will be open until May of 2022.

“Every time that I go up to the exhibit, I find that someone has sorted the seeds and a lot of visitors are interested in how we preserve the plants,” Fox said.

Helzer was posting the images on his blog, “The Prairie Ecologist” when the images started to gain more traction. When noticing the reactions of readers of the blog, Helzer had the idea to turn the project into a book.

“Honestly the idea of doing a book on the project didn’t come about till around later because the story was starting to resonate enough with people. The museum exhibit was even later than that,” Helzer said.

The exhibit is also interactive so that viewers cannot only read and view the prairie but have a simulated experience of one for themselves.

“I am still staggered that we were able to construct these square meter plots of prairie,” Helzer said. “My vision would be that these little kids would end up searching these plots for 10 minutes.”

Along with the plant species found within the prairie, various insect and animal species are featured. One of the main focuses of the exhibit is the maximilian sunflower, which blooms in the early weeks of September. The exhibit has a list of species so individuals can search through the cases looking for each animal on the list.

“We went out and harvested grasses within each of the four seasons, preserved them, and recreated them in cases in the exhibit,” said Angie Fox, head of exhibits at Morrill Hall.

In addition to searching the square meter plots of prairie, visitors can also see a large model where they can sort the insects by their features and characteristics. Another activity focuses on matching insects to the seeds of the prairie that they use. 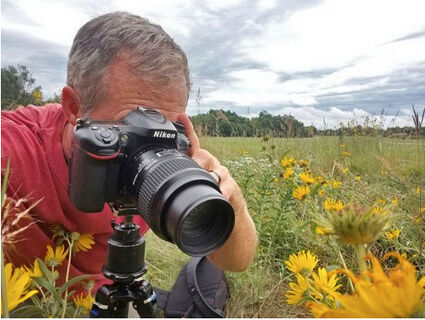 “Every time that I go up to the exhibit, I find that someone has sorted the seeds,” Fox said. “A lot of visitors are interested in how we preserve the plants, so it has been received pretty well.”

The exhibit and the book both feature 113 species that were found in the one square meter in a single year. It also details Helzer’s relation to the prairie, the stories within the plot of land, and about Helzer himself.

One of the turning points in the project was early on when Helzer was still trying to fully conceptualize the project. He was out at the square meter in May trying to capture a great photo and ended up patiently waiting for an ant to come into view on a sunflower. This was when Helzer really internalized what he had been saying about prairie for years; taking a closer look “below the surface” shows the interesting aspects of a prairie.