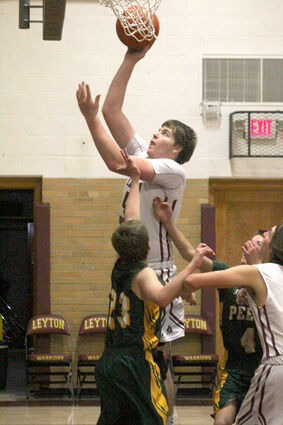 Leyton's Warrior Basketball team is off to a strong stat to their 2021-22 campaign, with four straight win to start their season. After having little trouble with Kimball and Morrill last week, the boy's squad hosted the Peetz, Colo., team on Friday, and absolutely dominated the game, scoring 36 straight points in the first and second period before the Bulldogs could even get on the board.

The Peetz squad that recently had been a force in Colorado 1A Basketball is in a rebuilding mode, with new and younger players that will need much seasoning before they become competitive with the better teams they face.

Leyton had three players end the night scoring in double digits, senior Scout Gamble and juniors Dillon Juelfs and Justin Ernest. All of Gamble's points came on three-point shots, hitting 4-of-6 attempts for 12 points. Junior Cort Rummell had a fine defensive game, with five steals and four rebounds in the victory.

Leyton then traveled to South Platte, and rolled up a big first quarter to pull away with a 26-to-8 lead and never looked back on their way to an easy 71-to-25 victory over the Blue Knights. Dillion Juelfs lit up the scoreboard with 22 points, followed by Justin Ernest with 13 points in the victory.

On Tuesday the Warriors were scheduled to host the 2-and-0 Potter-Dix Coyotes in Dalton.