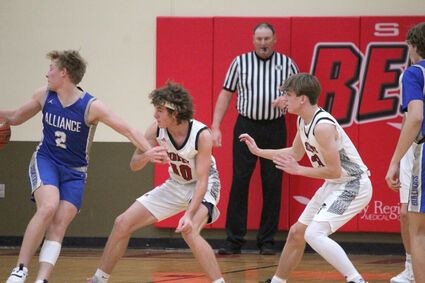 Sidney’s Basketball teams have both had a great start to the 2021-22 season, and traveled to Holdrege on December 21 for a matchup against the Dusters prior to next week’s Cabela’s Holiday Tournament.

The 5-and-1 Lady Raiders matched up first with the 3-and-3 Lady Dusters, and from the start the two teams were engaged in a battle. Both defenses pressed, limiting scoring opportunities on both sides, and at the end of a low-scoring first half, the Lady Raiders trailed by a point, 18-to-17. 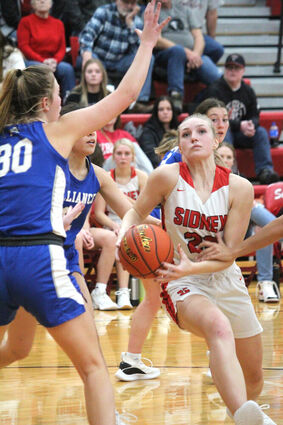 The Lady Dusters turned up the offensive pressure to begin the second half, and opened with a 13-to-4 run to put them up by 10 points late in the third period. Sidney finally caught fire on offense and closed the period with a 7-to-0 run to trail by three going into the fourth quarter, 31-to-28. Sidney again showed their resilience and patience when trailing late in a game. About halfway through the quarter the Lady Raiders had chipped away the lead and tied the score at 34-to-34. Holdrege scored and regained the lead, only to have Sidney senior Alecca Campbell knock down two free throws to tie the score again. As time wound down and the teams battled, senior Emilee Wieser found her range and drained a three point shot to give Sidney a three point lead. Holdrege fouled senior Brynna Ross trying to get the ball back, and she made a final free throw to give the Lady Raiders the four point 40-to-36 win. Junior Reese Riddle led the scoring for the Lady Raiders with nine points and junior Gabrielle Fortner had eight points in the victory.

The boys game was not nearly as close as the girl’s contest, as after an initial close first period, Sidney started to hit three pointers and built a big lead in the second period. Sophomore Isak Doty was on target at the three-point line, with three hits during the second period to help Sidney put up 21 points in the second quarter. The Red Raiders went into the halftime up 37-to-19, and continued their good play in the third quarter. By early in the fourth quarter with a 40 point lead, the running clock was initiated, leading to a 72-to-38 victory for Sidney. Sidney had four players score in double-digits, led by Doty with 19 points, followed by senior Sawyer Dickman with 12 points while juniors Micah Schneider and Cam Leeling each scored 11 in the victory. Sidney hit 12 three point shots in the game, accounting for half of their point total.

Both Sidney teams move to 6-and-1 on the season and take a short break before the Cablea’s Holiday Tournament starts on December 27 at Sidney High School.