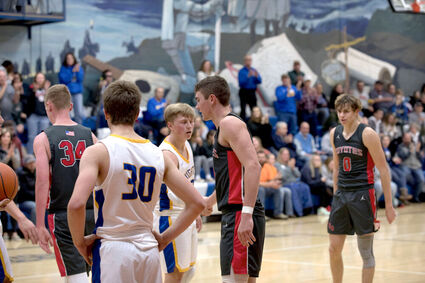 Potter-Dix's Coyote Boy's Basketball team had three games over the past week, and lost their first game of the season to Bayard on Friday. The week's action started on Monday, January 3, when the Coyotes hosted the Morrill Lions. The Coyotes took a lead early, and even after Morrill rebounded with a solid second quarter, the Coyotes still had a 28-to-21 lead at the half. A solid third quarter by Potter-Dix with strong defensive play put the game out of reach where a strong fourth quarter by Morrill was not nearly enough to overcome the deficit, and the Coyotes came away 55-to-39 winners. Junior Luke Kasten led the scoring with 21 points in the win.

On Friday the Coyotes hosted the Bayard Tigers, and a strong opening quarter by the visitors put the Coyotes in a 19-to-15 hole. But the Potter-Dix squad recovered and had a strong second quarter, putting up 17 points and holding the Tigers to just seven points, and the home team had a 32-to-27 lead at the half.

Another strong performance in the third quarter put even more distance between the teams, and the Coyotes went into the fourth quarter up 13 points. But the fourth quarter was a disaster for Potter-Dix, and the Tigers took advantage and scored seemingly at will while the Coyotes could not get their shots to fall or stop the Bayard offense.

The Tigers put up 25 points in the period against the Coyotes' nine, and stole a victory by a final score of 63-to-60. Kasten again led the scoring with 32 points in the loss.

Potter-Dix looked to put the loss behind them on Saturday and traveled to Big Springs for a match up with the South Platte Blue Knights. The game started with the teams battling to a 13-to-13 tie at the end of the first period, but Potter-Dix bore down and turned up the defensive pressure in the second quarter and posted a 22-to-2 blowout in the period. Up at the half 35-to-15, the Coyotes were able to cruise through the second half, and came away with a 60-to-45 victory. Junior Luke Kasten scored his 1000th point of his High School career in the win. Potter-Dix was scheduled to host Kimball on Tuesday.