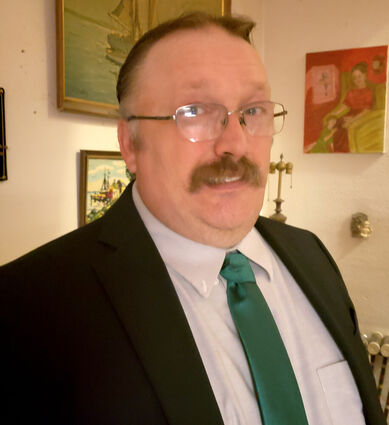 Larry Bolinger of Alliance has officially registered as a candidate for Attorney General with the support of the newly formed “Legal Marijuana Now Party.”

Bolinger was a candidate for Nebraska's 3rd Congressional District House of Representatives seat in 2018 and 2020.

Bolinger is an author of 16 books, a veteran that served honorable in both the US Air Force and Army National Guards. He is also a volunteer with the Activate Alliance to make communities safer and more active, and the Volunteer In Police Services helping law enforcement when needed. Received a Bachelor of Science degree from the University of Nebraska. Majored in Political Science and Minored in Criminology.

The procedures they conducted did not follow state statutes. I spoke out against it, but the City went after those business owners anyway and took their properties. From that, I decided to run for City Council so that there would be at least one person that has the public interest.  In the 2006 campaign, both myself and now Senator Fischer had campaigned against the “Substandard and Blighted” program because local governments can force people to sell their properties by utilizing unethical means. I have also spoken out against the change in the tax lien foreclosure law that made it easier for the wealthy to take away property from the less fortunate. Many policies have been created to help the rich get richer at the expense or loss of the poor or less fortunate. I do not support those policies.

“In my political career, I have run for City Council, State Legislature, and Congress. I have argued and changed several policies at the local, state, federal levels. I received a Bachelor of Science degree at UNO with a Major in Political Science and a Minor in Criminology.  I have even fought against government officials that created unlawful actions.  Such as: refusing to follow state statutes, refusing to follow judicial procedures, creating fraudulent extorsion practices, refusal to follow police procedures, committing fraud on official documentation, 1st Amendment violations, 8th Amendment violation (over penalizations), and law violations under The United States Code Title 18 10001 and the Federal Rules of Civil Procedure 9(b). Title 18, United States Code, Section 1001,  just to name a few,” Bolinger said in his press release.

“My primary focus is reviewing and introducing new policies concerning victimless crimes.  Over the past 20 years, our government has been focused on creating harsher penalties and expanding our correctional facilities. This has created an overpopulation in our correctional facilities with a high recidivism rate.  I am the only candidate that is focused on law reform. Now is the time to get that done. If we keep on electing career politicians, we’ll need to add several more correctional facilities.  We need more focus on a rehab program, mediation, drug courts, community service, and intense supervision programs. Those programs have been statistically proven to reduce recidivism by as much as 60 percent. If we continue the same path we could double the prison population within the next 10 years.  We need change,” he said.

“I have argued against truancy being labeled as a status offense. Putting kids through juvenile courts has shown to increase worse behaviors and it damages the social development of the child. Charging Parents for misdemeanor charges for their child skipping school is an overreaching and unjust penalty. Unjust penalties create distrust in our legal system. With changes in school procedures due to the Pandemic, there is a need for flexibility and continued procedural improvements.

I have also argued for police reform. I started pushing for police reform about a decade ago when I ran for Legislature. I pushed for reform after one of the kids that I cared for at the Nebraska Boys Ranch was brutally murdered by the Police Chief in Crawford Nebraska. The Police Chief got away with the murder because the lawyer failed to file the paperwork properly. I’ve made pushes to help support the President's Taskforce on 21st Century policing. I wrote a training manual and presented that proper restraint program to many law enforcement agencies in several States. The change from the 1980’s era community policing to 21st Century policing has significantly improved law enforcement activities and community support in my area.

I have just presented an issue where Marijuana has been knowingly labeled the wrong Schedule for the past several decades causing hundreds of thousands of people their livelihood.  It has been proven to have medical use in 1997 by the Institute of Medicine.  I expect to have this error fixed. I do support the legalization of marijuana and medical marijuana.”

He has also sent policies that show how the banking institutes were allowed to get away with not paying contractors. He presented a lengthy research analysis on many illegal functions in our banking industry to both our State and Federal representatives with little to no action being done by our elected officials. This concerns thousands of contractors where the banking industry extorted their work for no payout costing contractors hundreds of thousands of dollars. President Bush’s policy to make the banks unbreakable should not mean they have the right to steal from the American workers.

He also sent a request to change meatpacking policies and pointed out how the large packing facilities were manipulating the pricing so that the Ranchers got a lower pay and the consumer has to pay more to allow the packing plants a higher payout. He presented some of the problems in the new state meat inspection program, and pointed out what policies need to be added so that we can have State Inspectors, USDA Inspectors, and USDA certified State Inspectors with the cooperative to allow state–to–state trade and international trade.

“I believe that in many cases when you are passing policies, you need to do in-depth research so there are fewer errors In policies.  Review the numbers, review the statistics, listen to the public so you can come up with the best decision. Sometimes a lack of policies could stop a business from running. In this issue,  the state and federal policies would clash and would not allow state-to-state sales or international sales if the policies I presented are not implemented,” he said.

He is working on more than 20 different policies on law reform. There are many more policies that I’ve worked on, but it would be far too long to put all my arguments in one article. I did write a book on most of my arguments called “Politics: Last Act of Defiance.” I am working on volume II that would be geared more towards policies that would concern an Attorney Generals' position.

He said he would like to conduct law reform to reduce recidivism to reduce the population in our correctional facilities so that we can have proper funding for our schools. I would like to see an AG elected that will support the people rather than one focused only on a political agenda.