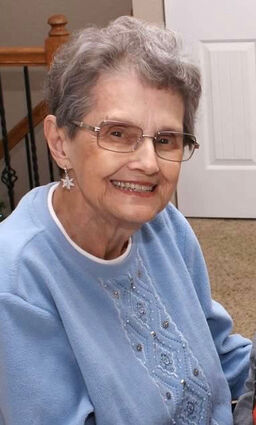 Beverly June (Engelland) Marshall, 83 years, of Loveland, Colorado was welcomed by her Lord and Savior on December 30, 2021 at Riverbend Health & Rehabilitation Center in Loveland, Colorado after a rapid decline in health. Beverly will be dearly missed and forever remembered by her family and all who had the fortune of knowing her.

Beverly was born on April 10, 1938 in Sidney, Nebraska to Walter and Rita Engelland. She grew up in rural Sidney, Nebraska on the family farm and graduated from Gurley High School in 1956. In 1959 she married Michael Marshall in Honolulu, Hawaii. They lived briefly in Seattle, Washington before making their home in Sidney, Nebraska. They were soon joined by three wonderful children, Gwen, Patrick and Leigh Ann.

In 1978 Beverly relocated to Fort Collins, Colorado where she worked for several different companies as a bookkeeper and payroll specialist over the years until she retired in 2000. She moved to Loveland, Colorado in 1993. She attended church services at Peace With Christ Lutheran Church located in Fort Collins, Colorado.

Beverly remained a diehard Nebraska Cornhusker Football fan her whole life and she was also a huge Denver Broncos Football fan. Many Saturday and Sunday afternoons were spent glued the TV watching her favorite teams.

Beverly loved her family first and foremost and remained close to her parents and her siblings, enjoying many family gatherings throughout the years surrounded by her children, grandchildren, nephews and nieces, grandnephews and grandnieces, and great-grandchildren. Many of the most memorable family gatherings were held at the family farm near Sidney, Nebraska. Beverly was an amazing cook and enjoyed making meals for her family. She was also an excellent baker and her many creations were highly anticipated by all.

A celebration of life will be held in the spring when the entire family can gather together.