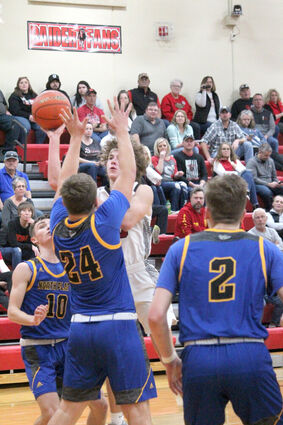 Sidney's Red Raider Boy's Basketball team had another busy week with three games, and won two out of three to continue their success and raise their record to 12-and-3 on the year.

The week started with the Raiders hosting Mitchell, and the struggling Tigers fell behind early, and trailed 45-to-20 at halftime. Sidney continued to score well in the second period and Mitchell never threatened, and Sidney took the victory by a final of 76-to-50.

Next the Raiders traveled to Ogallala and had a tough battle with the 7th ranked Indians. Sidney started hot, with senior Sawyer Dickman, junior Micah Schneider and sophomore Isak Doty all nailing three point shots to propel Sidney to an early 14-to-2 lead.

However, the Indians shored up their defense started to get their shots to fall, and cut the Sidney lead to 14-to-13 at the end of the first quarter.

Ogallala went on a run to take the lead to start the second period, then Sidney battled back and the teams traded scores and went into the halftime tied 28-to-28.

Sidney then hosted the North Platte Bulldogs on Saturday, and the Bulldogs started fast and opened an early lead. However, the Raiders stormed back to narrow the gap, trailing by two at the end of the first period. Sidney kept up their good play and battled with visitors, going up one point at the halftime, 27-to-26. However, in the second half the North Platte big men, 6' 6” Carter Kelly, 6'6” Daniel Shea and 6'4” Andrew Solon, started to take over the game, dominating under the boards and scoring inside, and the Bulldogs started to pull away from the Raiders.

A big fourth quarter by the Bulldogs was too much for Sidney to overcome, and the Raiders fell by a final score of 62-to-46.

Sidney moves to 12-and-3 on the year and next hosts Gothenburg on Friday, January 21.