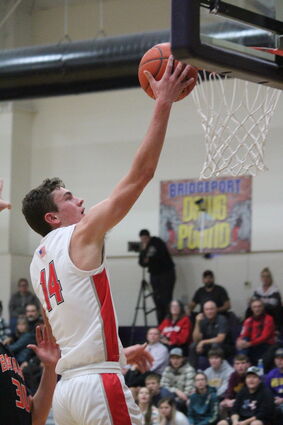 Potter-Dix's Coyote Boy's Basketball team entered the MAC Tournament as the number one seed and played like it, easily dispatching Banner County in the first round of the tournament then having little trouble with Garden County in the semi-finals, then winning a thriller against Bayard in the finals.

The action started Monday January 17 when the Coyotes matched up with number 8 seed Banner County, and the winless Wildcats had no answer for the explosive Potter-Dix offense, going down 27-to-4 at the end of the first period. The Wildcats then trailed 44-to-13 at the half, and Potter-Dix cruised to an easy 64-to-20 victory. The Coyotes had three players score in double digits, including junior Luke Kasten with 15 points, junior Zach Rotert with 11 points and senior Thomas Muldoon with 10 points.

The Coyotes matched up with Garden County in the semi finals on Thursday January 20 in Bridgeport, and again the Coyotes opened with a big first quarter, going up 21-to-3 then adding 17 more points to go into the half leading 38-to-11. Garden County had a good third period, outscoring the Coyotes 14-to-12 in the period, but it was far too little to make a difference, and the Coyotes cruised to a 67-to-41 win and punched their ticket to the finals. Again the Coyotes had three players scoring in the double digits-Luke Kasten with 26, junior Karter Whitrock with 14 points and Thomas Muldoon with 13 points. In the other semi-final game, Leyton was defeated by Bayard, and with both teams having a win against the Coyotes this season, the Potter-Dix squad knew they would have their work cut out for them on Saturday.

The Coyotes matched up with Bayard Saturday night in Bridgeport, and both teams played tough defense, keeping the scoring low and each possession critical. Potter-Dix had opened a 10 point lead in the second period, but Bayard went on a 10-to-0 run and the game was knotted at 20-to-20 at the half. The play continued into the second half with Potter-Dix gaining a two point advantage, 30-to-28, at the end of the third period. Both teams battled in the fourth period, working hard for every point. As the time wound down, Luke Kasten was able to put up successive baskets and the Coyotes pulled ahead 34-to-32. Bayard was in position to tie the game when Bayard's Garett Hopkins scored, but Thomas Muldoon was able to draw a critical charging foul, taking away the two points and turning the ball over. Potter-Dix then hung on to take the two point win, and the MAC Championship for the second year in a row.Luke Kasten led the scoring with 15 points and Thomas Muldoon added 11 points in the victory. The Coyotes get a breather and get a full week off before starting up again on Saturday January 29 when they host Minatare.