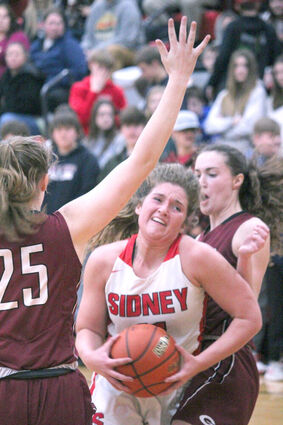 Sidney's Lady Raider Basketball team had two games over the week, and came away with one win and one loss. However, they had another loss which will affect the team for the rest of the season when senior and leading scorer Alecca Campbell was diagnosed with a torn ACL, ending her senior campaign early.

However, Sidney Head Coach Tyler Shaw has been in this position before, and with a talented and well-coached bench to draw from, should find a way to replace Campbell's production with combination of players bolstering the offense.

Sidney's first game of the week was on Friday as they hosted the Lady Swedes of Gothenburg, and played a crisp first quarter, matching up well with the Lady Swedes and earning a three point advantage at 15-to-12. The momentum shifted in the second quarter as the Lady Raiders had too many turnovers and missed shots, while the Lady Swedes found their groove and took a 24-to-21 lead into the halftime intermission.

Sidney fought back in the third period, and Sidney eventually chipped away at the lead and gained a 33-to-32 advantage when senior Brynna Ross and sophomore Katie Ramsey each hit three point shots to end the period. In the fourth quarter, the Lady Swedes opened strong and took a six point lead until the Lady Raiders roared back to take a 43-to-42 lead at around 2:30 left in the game on junior Rheagan Stanley's layup. The teams traded the lead in the final minutes until Gothenburg pulled out a 48-to-45 lead with 55 seconds left. Sidney just could not get the ball to fall through the hoop, and when Rheagan Stanley's last-second three pointer missed, and the Lady Swedes stole the 48-to-45 victory. Ross led the scoring for Sidney with 13 points, followed by Stanley with 10 points.

Sidney then traveled to Yuma, Colo., on Saturday for a game against the Lady Indians and had no trouble getting back on the winning track. After falling behind to start the game, Sidney's aggressive passing and strong defense were too much for the Yuma team, and the Lady Raiders cruised to an easy 59-to-18 win. Sidney now sits at 14-and-3 for the year and next hosts Chadron on Friday at Sidney High School.