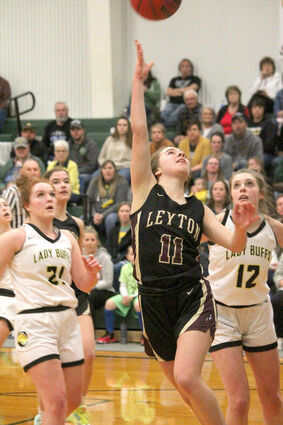 Leyton's Lady Warrior team had a busy week coming off the MAC Tournament, with games on Tuesday, Friday and Saturday. On Tuesday, they hosted the Banner County Lady Wildcats, and had no trouble earning the win. After a 22 point explosion in the first period, the Lady Warriors cruised the rest of the way for an easy 69-to-13 win. The scoring for Leyton was lead by the freshman tandem of Zaili Benish with 22 points and Shawnee Gamble with 17 points.

On Friday the team traveled to Minatare to match up against the Lady Indians for the second time this season, and like in the first contest, the Lady Warriors had little difficulty building a lead and holding it, ending the game with a 53-to-18 victory. After building a 33-to-11 lead at the half, the Lady Warriors were able to coast the rest of the way for the victory. Zaili Benish again led the scoring with 23 points, followed by junior Axi Benish with 10 points in the win.

On Saturday, the Lady Warriors traveled to Peetz to match up against the Caliche Lady Buffaloes. With Peetz not fielding a girls' basketball team this season, the Lady Buffaloes made the short trip to Peetz for the contest. The contest started as a defensive struggle as neither team could get off any clean shots, and the score was knotted at 2-to-2 halfway through the first period. A few shots began to fall, and Zaili Bensih buried a three point shot at the buzzer to give Leyton an 11-to-9 lead at the end of the first period. Leyton started to have trouble containing Caliche sophomore Karyn Huss, and she led the Lady Buffs offense in a turnaround that had Leyton trailing 28-to-21 at the half.

Caliche was winning under the boards and Leyton's shooting went cold, but the Lady Warriors hung on and kept pace with the Caliche scoring in the the third period. Down 33-to-41 going into the fourth period, Leyton's offense took over as it was Caliche's turn to go cold, and the Lady Warriors clawed their way back. To controversial calls that went Leyton's way in the final minute gave the Lady Warriors an opportunity, and Zaili Benish made two free throws at the end of regulation to tie the game and set up an overtime period. However, the Lady Buffs got hot again, led by Huss, and Leyton was bitten by the turnover bug, and the Lady Buffs were able to open a lead and hang on, earning the victory by a final score of 62-to-56. Zaili Benish was outstanding in the game, pouring in 33 points in the loss. Leyton moves to 9-and-6 on the season, and was scheduled to travel Tuesday to match up against Sedgwick County.