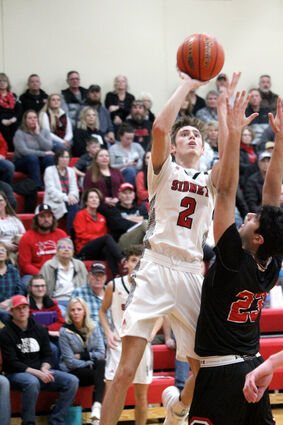 Sidney's Red Raider Basketball teams hosted the Chadron Cardinals Friday night, and both Sidney teams were unable to get past good defensive performances by the Cardinals and lost their games. It was Senior Night, and the Cardinals came in looking to spoil the event starting with the girls' contest.

The first quarter of the girls' game was well played by both sides, with both defenses slowing the scoring in the opening minutes of the game until both teams started to have success shooting from the field. Freshman Kayla Westby drained a three point shot as time expired in the first period to give Sidney a 19-to-17 edge going into the second period. The good play by both teams continued, but it seemed the Chadron defense was getting the better of the Lady Raiders through most of the period. However, Sidney came back in the last minute of play and took a 32-to-31 lead into the halftime intermission.

In the third period, Chadron took a lead in the early going, but timely three point shots by junior Reese Riddle and senior Brynna Ross kept the Lady Raiders close, then put them in the lead. Chadron fought back and went ahead again, but strong rebounding got the Lady Raiders the lead back, and they went into the fourth period up 49-to-48. Chadron took a one point lead early in the fourth, then both teams were hit by a string of turnovers, but each team was unable to capitalize on the other's mistakes. Sidney regained the lead at 55-to-53 with 3:35 left when Westby went coast to coast then drove the lane, switched hands and put up a layup in traffic.

Both teams were having difficulty putting the ball through the hoop, but with 20 seconds left Sidney held on to a one point 57-to-56 lead. Chadron's Demi Ferguson was fouled and made both her shots to put Chadron up by one, but then Sidney sophomore Katie Ramsey returned the favor by sinking a free throw with eight seconds left to tie the game at 58-to-58. After a timeout, Chadron's Ferguson took the ball all the way down the court, cut through the Sidney defense which was making sure they didn't foul, and put up a layup for two points to go ahead 60-to-58. With two seconds left, Sidney inbounded the ball but was unable to get a shot off, and the Cardinals stole the win 60-to-58. Reese Riddle led the scoring for the Lady Raiders with 23 points in the loss.

The Lady Raiders got a chance to get back on the winning track Saturday afternoon, and traveled to Colorado to match up against the Brush Lady Beetdiggers. The teams were close through most of the game, with Sidney holding a lead, but Reese Riddle was too much for the Brush girls as she scored 28 points, including 11 in the fourth quarter, to secure the win. It was a big fourth quarter that enable the Lady Raiders to pull away and seal the 57-to-38 victory. The Lady Raiders move to 15-and-4 on the season.

For the boy's team, Friday night against Chadron had the teams locked in a tight contest, trading scores until a three pointer by sophomore Isak Doty gave the Red Raiders an 11-to-10 edge. The three point shot tied the Sidney record for three-pointers in a season at 66, which Doty went on to break later in the game with two more three point shots. In the second quarter the Cardinals went on a run to pass Sidney, but the Red Raiders responded and regained the lead, taking a 22-to-18 lead into the half. 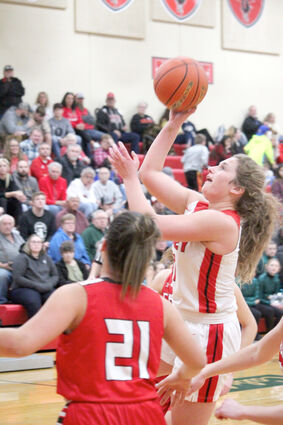 Sidney continued the good play into the second half and maintained a lead until the final minutes of the period when Chadron started to score. This continued through the fourth period, with 6'5” Chadron senior Justus Alcorn piling up the points inside, until Sidney found themselves in a 59-to-53 hole with two minutes left. Too many missed shots by Sidney combined with Chadron making their free throws down the stretch ended the game in a 64-to-56 loss for the Red Raiders, and extended their losing skid to four games.

Sidney looked to snap their losing streak on Saturday, and started hot with Isak Doty scoring 12 points to start the game and Sidney building a lead early. The Raiders went into the half up by 16 points, and continued to hold the double-digit lead through the remainder of the contest, and came away with a 63-to-42 win. Senior Sawyer Dickman led the offense with 17 points in the victory. Sidney moves to 13-and-6 on the season, and both Sidney teams travel to Gering on Friday to match up against the Bulldogs.