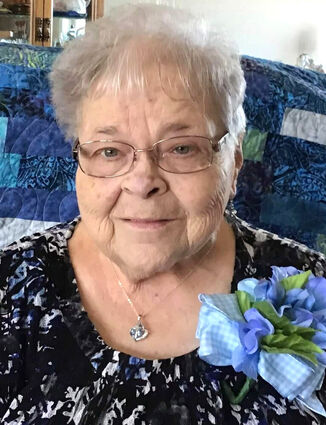 Barbara “Kay” Siebe, age 78, of Potter, NE was called to the Lord on Wednesday, February 2, 2022 and joined her beloved husband, Ric, who had been patiently waiting for her with open arms since February 2, 2008. A family memorial service will be held at a later date. In lieu of flowers, memorials can be made to the Holy Trinity Lutheran Church (Sidney) or Potter Volunteer Fire and Rescue Department in her honor.

You may view Kay’s Book of Memories, leave condolences, photos and stories at http://www.gehrigstittchapel.com.

Barbara ‘Kay’ Siebe, Kay, the daughter of Albert and Estella Johnson, was born Feb.12, 1943 in Crawford, NE.  She moved with her parents and siblings to Casper, WY in 1944, where her father was a minister at Trinity Lutheran Church. She grew up in Casper and at age 20, married the love of her life, Ric Siebe, Nov. 28, 1964.

Kay was a bank teller for a short time before taking time off to raise their 2 daughters, Michelle and Kimberly. She re-entered the workplace when her and Ric reopened Siebe Upholstery in 1983. They retired in 2000 to watch their grandchildren grow up, which led to their move to Potter, NE in 2006, where they lived with Michelle and family.

Kay loved the Lord throughout her life and was a very active member until her health no longer allowed her to participate as much as she’d like, but her faith was always strong and never waivered.

Kay was a faithful wife to her beloved husband Ric; loving mother of their 2 daughters, Michelle Onstott and husband Mark of Potter, NE and Kimberly Siebe of Parachute, CO; and a dedicated grandmother to her grandchildren, Colton Onstott and wife Olivia of Lakeland, FL, Ryan Onstott and significant other Emma Beckenhauer of Lincoln, NE, Alesha Siebe and significant other Josh Bush of Portland, OR, Noah Siebe and Mardi Siebe, both of Parachute, CO.

She was preceded in death by her beloved husband Ric, brother Bob and her parents.