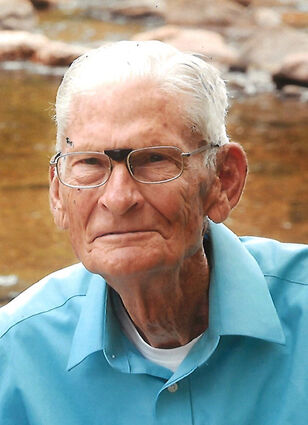 You may view Ernie’s Book of Memories, leave condolences, photos and stories at http://www.gehrigstittchapel.com.

Ernest August Kahrs, the son of John Peter and Anna Wilhelmina (Einemann) Kahrs, was born February 6, 1931 in Chappell, NE. Ernie attended Goodview School through the 8th grade and graduated from Lodgepole High School in 1949. Ernie began his lifelong love of farming the land for Harold Isley of rural Lodgepole when he was 14 years old. He also helped several of his Einemann and Kahrs uncles with their farms during his school years. In 1951, Ernie was drafted into the Army to serve in the Korean Conflict. His basic training was at Ft. Riley, KS. He was shipped out of Seattle, WA to Korea. He served with an artillery unit for a short time and then became a military chef. Many stories were told of just how many potatoes were peeled! Ernie was discharged in June 1953 and returned to Lodgepole to continue farming for the Isley’s. Over the years Ernie farmed for several different families while acquiring his own land holdings. He retired from farming at the age of 89 in 2020.

Ernie was baptized, confirmed and a lifelong member of Immanuel Lutheran Church/Gloria Dei Lutheran in Lodgepole. He was the last member married at Immanuel Lutheran on February 13, 1955 when he married Pauline Schoenholtz. After their marriage he helped build the new church which was called Gloria Dei. To this union three children were born, Pam, Steve and Sandra. During the years of raising the children, Ernie had many cattle, sheep, hogs, chickens, ducks and turkeys to keep everyone busy. He employed many of the area youth (and nephews) during that time to stack and haul bales or work for him during harvest. Ernie enjoyed camping, hunting and fishing with family and friends and his country music that was always playing in the background.