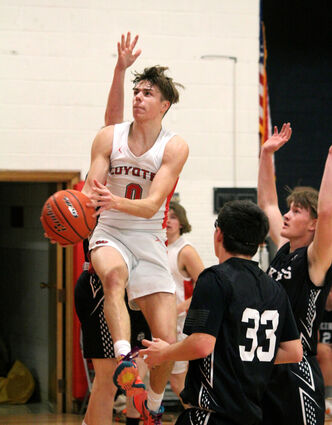 Potter-Dix's Coyote Basketball season continued their winning ways with two more victories over the week to move their season record to 15-and-2.

On Thursday the Coyotes matched up at home with the Garden County Eagles, and a relatively tight contest had Potter-Dix leading 22-20 at the end of the first half. The third quarter was dominated by the defenses as both teams struggled to score. The scoring picked up in the fourth quarter, and Potter-Dix was able to build upon their lead and take the 44-to-37 victory. Junior Luke Kasten led the scoring with 16 points in the win.

The Coyotes hosted the Guernsey-Sunrise Vikings out of Wyoming Saturday afternoon, and after building a big lead to open the game, the visitors came back and scored a few field goals to make the score 20-to-12 at the end of the first period. The teams battled thorough a close second period, and Potter-Dix went into the half up 38-to-27.

The Coyotes had a big 21-to-5 third quarter to put the game away, then cruised through the fourth quarter on their way to a 84-to-47 victory. Kasten again led the scoring with 26 points, followed by senior Thomas Muldoon with 14 points and junior Zach Rotert with 12 points in the win. It was the Coyotes' highest scoring effort of the season, and they were scheduled to travel to Peetz to match up with the Bulldogs on Tuesday.