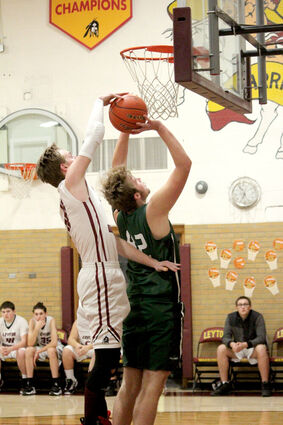 Leyton’s Warrior Boys Basketball team had a busy week with three games, and came out on the winning side in two of the the three contests. On Tuesday Feb. 1, the Warriors traveled to Colorado to match up with the Sedgwick County Cougars, and after a low scoring first period, the teams turned up the offense and matched each other score for score. The Warriors were strong outside the arc in the first half, and took a 27-to-23 lead into the intermission. The Cougars came back and tied the game early in the third quarter, but Leyton reloaded and went on an 11-to-2 run to end the third period. Sedgwick moved within six points in the fourth, but the Warriors were able to hold them off and took the 56-to-46 victory. Junior Justin Ernest led the scoring for Leyton with 13 points, and senior Scout Gamble hit double figures with 10 points and junior Jason Jensen also was in double figures with 12 points.

Leyton next hosted Creek Valley on Friday, and had no problem breezing by the struggling Storm team. Putting up 21 points on their way to a 44-to-10 halftime lead, Creek Valley was unable to keep up with the fast-paced Warrior offense, and Leyton took the game by a final score of 65-to-21.

Junior Dillon Juelfs led the scoring with 17 points, followed by senior Scout Gamble and junior Cort Rummel with 11 points each in the victory.

Leyton then traveled on Saturday to face the 16-and-1 Hyannis Longhorns, and were unable to overcome the Longhorns’ offense. Hyannis was able to pull away for a 77-to-53 victory. Ernest again led the scoring with 19 points in the loss. The week’s action moves the Warriors record to 15-and-3 on the season, and they were scheduled to host Bayard on Tuesday.