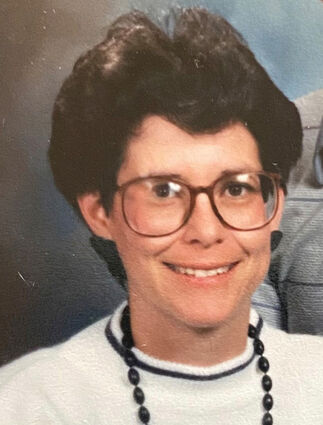 Vickie Marie Thomas, age 62, daughter of Clare and Margie Wilson Surber, was born June 21, 1959 on Father’s Day in McCook, NE. After a 30-year battle with MS, Vickie entered into her eternal home, free of pain and suffering, on February 3, 2022 at Chimney Rock Villa in Bayard, NE.

Funeral services were held at 10:30 A.M. Wednesday, February 9, 2022, at First United Methodist Church in Sidney, NE with Pastor Corey Jenkins officiating. Burial will take place in Greenwood Cemetery in Sidney, NE. In lieu of flowers, donations can be made to the Sidney Park Project on Vickie’s behalf. Friends may stop at the Gehrig-Stitt Chapel on Tuesday from 1-6:00 P.M. Family were present from 4-6:00 P.M.

You may view Vickie’s Book of Memories, leave condolences, photos and stories at http://www.gehrigstittchapel.com.

Vickie’s parents moved to Sidney in 1963 where she attended the Sidney schools until her graduation in 1977. During Vickie’s school years, she enjoyed playing the piano, saxophone and xylophone; was a member of local 4-H and Girl Scout clubs; and enjoyed playing softball. Vickie played the organ for the Methodist Church. After graduation, Vickie attended 2 years of college at WNCC; and a semester at the University of Nebraska.

By chance, Vickie went to a New Year’s Eve party with some friends at Dudes in Sidney, and met the man who would end up being the solid rock she never knew she would need, and the person she would enjoy picking on for the rest of her life. On Vickie’s 21st birthday, June 21, 1980, she said “I DO” to the man that would forever hold her heart, Elden Thomas. This union was blessed with two sons, Dustin and Tyler, whom she loved to watch grow and succeed. Vickie spent an enormous amount of time being a mom and wife, dedicated to doing everything for her family that she could, including chasing kids, events at cub scouts, baseball, golf, and wrestling. Vickie held various jobs around Sidney but most notably she enjoyed working at the flower shop, helping her mom run the House of Flowers for several years as a florist. Vickie made the most beautiful bows and loved to decorate for every holiday!! As a couple, Vickie and Elden did everything together, including Friday Night bowling, playing cards, and just doing “life”. Eventually, in 1990, Vickie was diagnosed with one of the most aggressive cases of MS in the country. Even during her flares, treatments, and medical battles, Vickie was always an optimistic ray of sunshine looking for the silver lining, was never one to complain about pain, and she always enjoyed drop-in visits from friends and family. She loved to bake and was never one to turn down a cold iced tea, fountain coke, or sweet treat! As Vickie’s medical condition deteriorated her physical abilities, she became a friendly greeting face at her dad’s service station at Sidney 66. Vickie remained sharp as a tack mentally and was a treasure trove of information. She could recount birthdays, addresses, recipes, memories, and phone numbers. By 2016, Vickie’s needs far exceeded what could be done at home and a tough decision was made to put her into a nursing home. She spent her last few years at the Chimney Rock Villa in Bayard. Her bright and cheery demeanor shone bright in every room she was in and will be dearly missed by many.

She was preceded in death by her father Clare, her grandparents, and several aunts and uncles.