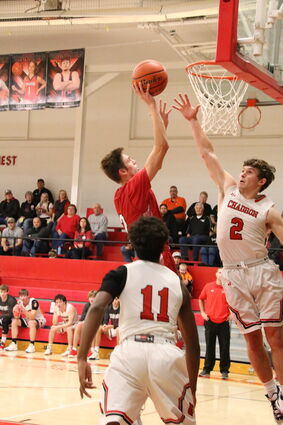 Two weeks ago, the Chadron Cardinals traveled down to Sidney and took two from the Red Raiders, but Sidney returned the favor Friday night, traveling up to Chadron for a sweep of their own. As the regular season runs down, the Raider teams are looking to play their best basketball as the season wraps, and got a good start with their road play against Chadron.

The girls started the action, with the Lady Raiders coming in at 16-and-5 and the Lady Cardinals at 13-and-8. Sidney was able to slow down the Lady Cardinals’ offense early in the game with their pressure defense, and held a 17-to-12 lead after the first period. Chadron fired back in the second period, but Sidney relied on four three-point hits to build a 39-to-28 halftime advantage.

That advantage disappeared in the third quarter when Chadron went on 13-to—2 run to start the second half, and knotted the game at 41 each. Sidney held on to a 46-to-45 lead at the end of the third, but Chadron quickly went up early in the fourth quarter. The teams traded scores and battled through the remainder of the quarter. Sidney junior Reese Riddle hit two free throws to give Sidney a three point lead at 55-to-52 with 10 seconds left, but Chadron sophomore Demi Ferguson hit a three point shot at the buzzer to push the contest into overtime. The Sidney defense shut down Chadron in the overtime period, allowing just one point from the free throw line while Riddle scored seven more points to lead the Lady Raiders to a 64-to-56 win. The victory moves Sidney to 17-and-5. Riddle led the scoring with 23 points, while junior Gabrielle Fortner added 11 points in the win. 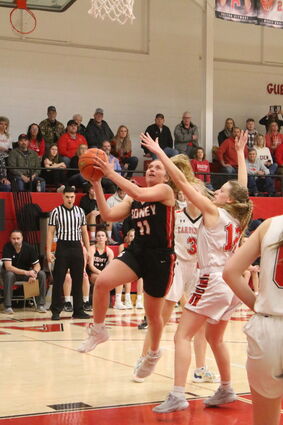 In the boys’ contest, the Raiders started hot with junior Micah Schneider draining three three point shots and junior Jacob Dowse adding six points to give Sidney a 15-to-8 lead after the first period. Sidney continued their strong play and good defense into the second period, and went into the halftime break up 32-to-25.

Sidney continued their strong play into the second half, pulling away from Chadron and holding a ten point advantage at the end of the third period, 49-to-39. Chadron tried to come back, but Sidney kept scoring, and made 9-of-12 free throws down the stretch to take a 65-to-53 win. The win moves Sidney’s record to 15-and-7, while the loss drops Chadron to 13-and-8. Schneider and Dowse led the scoring for the Red Raiders with 19 points each. Senior Sawyer Dickman was steady at the free throw line, making 10 of 12 shots and finished with 14 points. The Sidney teams were scheduled to host Scottsbluff on Tuesday at the Cabela’s Athletic Facility.