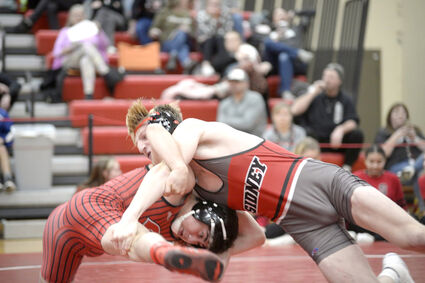 Sidney's Red Raider Boys Wrestling team competed at the District Championships over the weekend, and Sidney had two District Champions and two fourth place finishers qualify for the State Tournament. Chance Houser won a District Title at 113 lbs and Austin Munier won a District Title at 126lbs to qualify for the State Tournament along with Dietrich Lecher who placed fourth at 182 lbs and Landon Hanes who also placed fourth at 220 lbs to qualify. The State Tournament starts Thursday at the CHI Health Arena in Omaha. Go to www.nsaahome.org/wrestling for times, broadcsst schedules, and info...