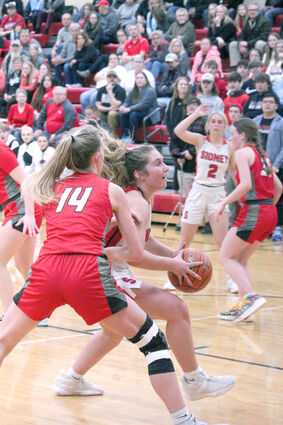 Sidney's Red Raider Basketball teams finished off the 2021-22 regular season portion of their schedules with big wins over Alliance on the road Friday night. The wins come off two losses against Scottsbluff at Sidney on Tuesday, with the Bearcats getting the better of the Red Raider teams in both contests.

On Tuesday, the Lady Raiders matched up with the Lady Bearcats, a team they had lost to twice before in the season. Also, the Lady Raiders had just lost to Lady Bearcats 10 days earlier in Scottsbluff, so the Sidney team was looking to get one back from their northern rivals. Sidney opened an early lead to start the game, but Scottsbluff senior Mariyah Avila hit a groove and hit three three point shots, tying the game at 11-to-11 then opening a 16-to-11 lead at the end of the first period.

Sidney quickly tied the game back up early in the second quarter on junior Gabby Fortner's two and one play, but Sidney's shooting then went cold and Scottsbluff's defense started generating turnovers. Scottsbluff increased their lead to 27-to-16 before the Lady Raiders started firing back and powered by junior Rheagan Stanely’s two three point hits down the stretch, the Lady Raiders were able to narrow the lead to 35-to-25 going into the half.

Sidney did a great job in the third period, playing solid defense while getting into a scoring groove, and whittled the Lady Bearcat's lead to just three points at 47-to-44 at the end of the period. The fourth period started with junior Reese Riddle tying the game at 49-to-49 with two free throws, then Sidney building a lead halfway through the period.

However, in the final minutes, Scottsbluff fought back furiously, and fouled the Lady Raiders while in the double-bonus to get the ball back.

The strategy worked as Sidney missed seven straight free throws down the stretch to give up the lead and fall by a final score of 66-to-62. Riddle led the Sidney scoring with 17 points, while Scottsbluff's Paige Horn led all scorers with 23 points in the game.

The Sidney boy's last encounter with the Bearcats ended with a 87-to-49 loss powered by 18 three point hits by Scottsbluff. This time, Scottsbluff opened the first period with five three point hits, and only one more three pointer for the rest of the game. However, that did not slow the Scottsbluff scoring as they opened a 15 point lead at the half, 36-to-21. Scottsbluff continued to score in the second half while Sidney struggled, opening a 50-to-30 advantage at the end of the third period. Sidney was able to cut the lead to 14 points mid-way through the fourth period, but Scottsbluff responded and ended the game in a 63-to-47 victory.

On Friday the Red Raider teams traveled to Alliance for the final games of the regular season, and the Lady Raiders had no trouble with the 7-and-15 Lady Bulldogs. Both teams had a rough start to the game, with the defenses generating turnovers on both sides, but Sidney did a much better job at capitalizing.

The Lady Raiders were able to score off of the turnovers, even though their outside shooting was cold, and ended the first period up 17-to-6. Sidney continued to pull away in the second period, and a last second three point miss by senior Brynna Ross was rebounded by Riddle, who was then fouled going back up for a layup as time expired. Riddle then made two free throws to give Sidney a 31-to-10 lead at the halftime break. Sidney went 8-of-9 on the free throw line in the first half, a big turnaround from their game against Scottsbluff.

In the second half, Alliance tried to increase the tempo of the game, but was unable to generate any scoring, even when grabbing offensive rebounds. Sidney ramped up their defense in response, and the Lady Bulldog's offense folded from the pressure. Turnovers plagued the Lady Bulldogs and Sidney kept scoring to increase their lead to 48-to-20 at the end of the third period.

With the big lead, bench players like Karsyn Leeling, Jordan DeNovellis and Zoey Christiansen got plenty of quality playing time down the stretch as the Lady Raiders continued to score and took the victory by a final score of 61-to-28.

Riddle again led the scoring with 18 points, while DeNovellis came off the bench later in the game and scored 8 points. With the win, Sidney ends its regular season with an 18-and-6 record. 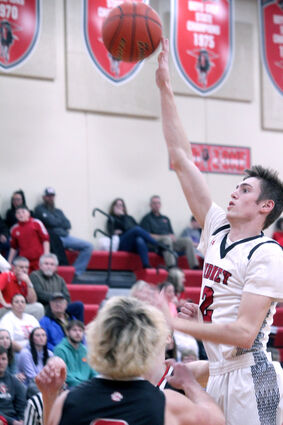 For the boys, Sidney broke out to a quick 8-to-0 lead powered by three point hits by sophomore Isak Doty and junior Micah Schneider, and opened a 17-to-6 at the end of the first period. Sidney opened up a 21 point lead mid-way through the second quarter, then Alliance was able to chip away and narrow the deficit to 35-to-21 at the halftime intermission. The second half continued in similar fashion, with Sidney increasing their score and opening a twenty-two point lead at 45-to-23 to end the third period. Sidney was able to continue scoring and took the victory by a final score of 63-to-39. Junior Jacob Dowse led all scorers with 19 points in the win. Sidney ends its regular season with a 16-and-8 record.