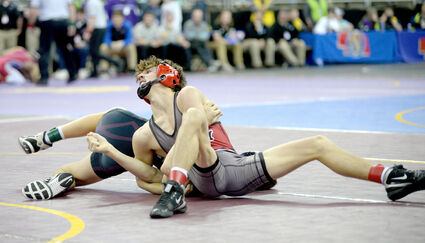 Sidney sent four wrestlers to the 2022 NSAA State Wrestling Championships in Omaha, and were able to bring home two medals with a second place finish by sophomore Chance Houser at 113 lbs and a fourth place finish by senior Austin Munier at 126 lbs. Houser and Munier were joined by senior Dietrich Lecher at 182 lbs and sophomore Landon Hanes at 220 lbs.

Both Lecher and Hanes were unable to get out of the first day's competition, each with losses that ended their tournaments. Both Houser and Munier battled thorough the day and survived to the next day's action. Houser would go on and earn a spot in the championship match, but lost to Kael Lauridsen of Bennigton.

Houser now has two appearances at the State Tournament and two medals. Munier got his 100th career pin in a match in the heartbreak round, but then lost a tough match to Bryce Karlin of Beatrice to earn fourth place. It was his fourth time to the NSAA State Championships and his third medal. Sidney's wrestlers earned the team a 13th place standing in Class B at the end of the competition.

The tournament ends another successful year for the Sidney Red Raider Wrestling teams. The young talent Sidney has coming up will ensure the Red Raider teams are competitive and will compete for State Titles for years to come.

Leyton High School wrestler Brenton Abbott qualified for the NSAA State Tournament in Class D, and lost both of his matches and was unable to advance to the next day of the tournament. Abbott's record for the year was 21-and-7.