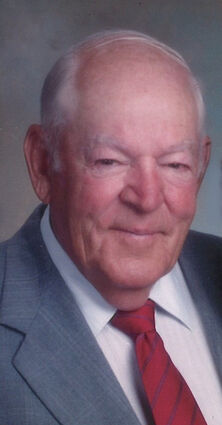 Herbert “Herb” H. Hruska, age 89, of Sidney, passed away in Sidney, on Sunday, February 27, 2022. A Wake with Rosary will be held at 6 p.m. on Thursday, March 3, 2022. A Mass of Christian Burial will be held at 2 p.m. on Friday, March 4, 2022, both will be held at St. Patrick’s Catholic Church in Sidney with Father C.P. Varghese officiating. Interment will follow at Greenwood Cemetery. A luncheon will be held prior to the funeral service at St. Patrick’s Parish Hall at 11:30 a.m. Services will be recorded and available on our website for viewing. Memorials can be made in Herb’s name to the St. Patrick’s Catholic Church. Friends may stop at the Gehrig-Stitt Chapel on Thursday, March 3rd from 1-4:00 P.M. Family will be present.

You may view Herb’s Book of Memories, leave condolences, photos and stories at http://www.gehrigstittchapel.com.

Herb was born in Sidney, NE on June 20, 1932 to Herbert and Ellen (Rauner) Hruska. He grew up on his parent’s farm north of Sidney where he learned his love for farming and cattle. He graduated from St. Patrick’s High School in 1950. After graduation Herb attended Creighton University for one year. He transferred to University of Lincoln and attended for two years. Before he could finish his college, the army drafted him and he entered the service in September of 1953.

On September 4, 1954, eight years to the day from when they met at St. Patrick’s High School in Sidney, Herbert married Patricia Ann Pelster at St. Mary’s Catholic Church in Dalton. Herb was serving in the Army Medics and was stationed at Camp Carson near Colorado Springs, CO. Since Herb had started to farm some of his parent’s land, he was granted an early discharge.

Herb and Pat moved to Sidney and lived in town for a few years. They bought a farm southeast of town which became their home for the rest of their lives. Herb was a cattle feeder and wheat farmer, but his family was the most important thing to him. He always enjoyed the camaraderie going to the sale barn but was happiest being around his kids. They had six children, Rosemarie, Carolyn, Dianna, H. Joseph, Laurie, and Michael.

Herb was preceded in death by his wife Patricia, one daughter, Laurie Gilroy, his parents and two sisters Patricia and Jean. Those left to cherish his memory are siblings Gerry Lang, Mary Ellen and husband, Carter Scales, Keith and wife, Pam Hruska, David and wife Kathy Hruska and Donna and husband John Thompson; his children Rosemarie and husband, Robert Wilburn, Carolyn and husband Steven Spencer, Dianna and husband, Jeff Beulke, Joe and wife, Yolanda Hruska and Michael and husband, Eric Hruska; Son-in-law Dan Gilroy. 12 grandchildren and 18 great grandchildren. He is also survived by close and extended family, plus many friends, including Scott and Sonia Corne.