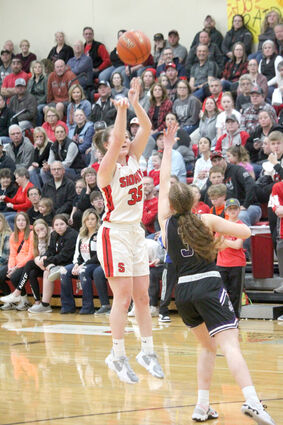 Sidney’s Lady Raider Basketball team battled through the Subdistrict Tournament in Scottsbluff to begin the week, and ended up facing rival Scottsbluff in the championship game on Wednesday.

After a slow start against Gering on Monday in the first round of the tournament, the Lady Raiders were able to regroup and have a big third quarter against the Lady Bulldogs and pull away with a 56-to-49 win to set up the finals match against Scottsbluff for the fourth straight year. Sidney had lost two games against Scottsbluff this season, the last being on February 15 when the Lady Raiders missed seven straight free throws at the end of the game to fall 66-to-62.

Scottsbluff started hot with six three point hits in the first period to take a lead. Sidney battled back to narrow the gap to 6 points at the end of the first period, 21-to-15. Scottsbluff continued to score from the inside in the second quarter, and their defense did a good job of forcing turnovers and intercepting passes, and the Lady Bearcats went into the halftime intermission up 37-to-27. Scottsbluff then opened the second half with 3 three-point hits to open a 17 point lead. Sidney battled back, but was only able to cut the lead to 14 points going into the final quarter.

Sidney would get within 8 points in the fourth, but Scottsbluff fired back and pulled away for the win by a final score of 71-to-59.

Sidney’s turnovers and Scottsbluff’s 8 three-point hits for 24 points were too much to overcome for the Lady Raiders, and they again lost to Scottsbluff in a Subdistrict Final game. However, Sidney’s 19-and-7 record earned them a home District Final game against the Blair Lady Bears on Friday evening.

Friday’s District Championship game was packed with a full house, and was a defensive battle throughout the contest.

The first period ended with Blair leading 10-to-6, with Sidney leading 3-to-2 early in the quarter-the Lady Raiders only lead of the game. The Lady Bears did a great job clogging the inside lanes on defense and did not allow many good looks for the Lady Raiders’ shooters.

However, Sidney also played strong defense and trailed by only five points at the end of the first half, 20-to-15. Sidney did a great on defense in the third quarter, limiting the Blair team to just eight points, but the Lady Raiders were unable to cut into the lead as they were only able to put up four points of their own in the quarter.

Sidney had a strong fourth quarter with 16 points, but the Lady Bears made their free throws down the stretch to keep Sidney at a distance, and wrapped up the victory by a 41-to-35 score. Junior Reese Riddle led the scoring for the Lady Raiders with 16 points, while freshman Molly Ladwig lead the Lady Bears with 14 points.

The Lady Raiders did not earn a State Tournament berth for the first time in five seasons, but had a successful season regardless. With a host of young talent gaining experience and becoming team leaders, look for Sidney again to challenge for a District Title and State Tournament trip with the strong young players they will return.

Also look for Head Coach Tyler Shaw to again make the adjustments and use the right combination of players to keep Sidney battling for the top of the standings in the Panhandle.