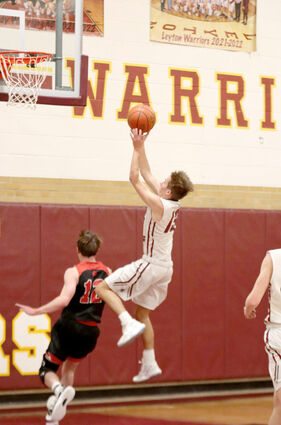 Leyton continued their fine season in the D1-12 Subdistrict Tournament, blasting Kimball in the first round of play on Tuesday then outlasting the Hemingford Bobcats in the final on Thursday. Leyton earns the No. 8 seed and was scheduled to play No. 9 seed Mead at Cozad High School on Tuesday, March 1.

Leyton started the season with a 28 point home win against Kimball back in December, and again opened a big lead to start the game with a 9-to-0 run. Leyton played fast and aggressively while Kimball struggled on offense, and the Warriors led 26-to-4 at the end of the first period.

Junior Dillon Juelfs led the Leyton scoring with 20 points, while Kimball senior Anthony Tovar had 15 points in the loss.

In the Subdistrict Final on Thursday against Hemingford, both teams started the game with turnovers and sloppy offensive play. Both teams struggled to score, and Hemingford held an 8-to-7 lead after the first period.

Leyton's shooting came on board in the second period, and they were able to quickly take the lead and get on track with their offense, pulling away at the end of the period and going into the halftime break up 24-to-18.

The second half continued with a similar pace, with Leyton continuing to score while Hemingford tried to make up ground. Leyton extended the lead to 9 points at 39-to-30 at the end of the third quarter.

The Bobcats started to chip away at the Leyton lead in the fourth quarter as the Warriors' shooting went cold. Hemingford narrowed the lead to 5 points on an 8-to-0 run until the Leyton offense shook off their shooting problems and started to score again. Leyton went on a 9-to-0 run to rebuild their lead, and despite a few late three-point hits by Hemingford, the Warriors hung on for the 58-to-47 win. Juelfs again led the Warriors with 21 points in the victory.

The 18-and-4 Warriors will face the 15-and-10 Mead Raiders at Cozad High School on Tuesday with a trip to the State Tournament for the winner.