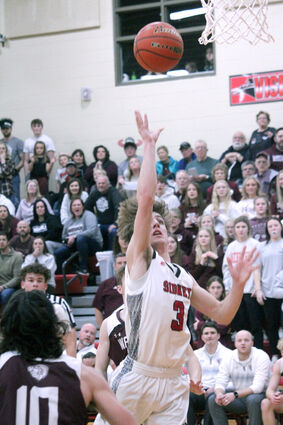 Sidney's Red Raider Basketball team had their season end Friday evening with a loss in the District Finals against the visiting Waverly Vikings, 50-to-44. Sidney hosted the game after losing against Scottsbluff in the Subdistrict Finals, but their strong record earned them a home District Final game.

Sidney went through the B-8 Subdistrict Tournament by first beating the Gering Bulldogs on Monday, but had a slow start and did not score until the final minutes of the first period. Both defenses played aggressively, and Sidney turned the ball over often with off-target long passes and forcing inside drives. Senior Sawyer Dickman was fouled shooting a three point shot with one second left in the first period, and made two of three free throws to give Sidney a 10-to-6 lead.

In the second period, Sidney started to win under the boards and moved the ball well on offense, and built a 9 point lead midway through the quarter. Sidney had trouble making layups and put-backs, but were able to limit the Gering offense. Sidney held a 28-to-20 lead at the half. Sidney built a double digit lead in the third quarter, but Gering went on a 5-to-0 run to narrow the gap to 6 points with about three minutes left. Sidney was able to find their scoring groove in the final minutes and took an 8 point lead at 42-to-34 at the end of the third period. A seven-point play with Sidney benefiting from a technical foul on Gering gave the Raiders a 16 point lead, and Sidney was able to keep Gering at a distance the rest of the way, and took the game by a final score of 67-to-56, setting up Wednesday's finals with Scottsbluff.

Sidney had faced Scottsbluff twice before in the season, losing both contests by wide margins. In the finals, Sidney started with three turnovers in the first 2:30 of play, and the Bearcats defense kept up the pressure. The first quarter ended with Scottsbluff leading 19-to-11, and Sidney with 7 turnovers and missing close shots they needed to make to stay in the game. The second period started with more Sidney turnovers, and Scottsbluff starting to pull away. The Bearcats were beating the Raiders on the boards and continued to score while playing effective defense. The teams went into the half with Scottsbluff leading 43-to-26. Sidney was unable to close the gap in the second half as the Bearcats continued to score, building a 61-to-40 lead at the end of the third period. Scottsbluff outscored Sidney 18-to-9 in the final period, and took the victory by a final score of 79-to-49. Dickman led the Red Raiders with 15 points while Kellon Harris had 22 points to lead the Bearcats.

Sidney's strong record earned them a home District Final game, and the Waverly Vikings made the long trip west on Saturday to match up against the Red Raiders. The Waverly team was athletic and fast, and quickly built a lead in the first period. The Vikings jammed up the inside and clogged the passing lanes, forcing Sidney into bad shot selections, and the Raiders trailed 21-to-9 at the end of the first period. This continued through the second period, with the Vikings pulling down rebounds and keeping Sidney to the outside while the visitors continued to score. The teams went into the halftime intermission with Waverly up 31-to-18.

Sidney chipped away at the lead in the third quarter, but their aggressive play put their leading scorer Sawyer Dickman on the bench for much of the third and fourth periods with four fouls. The Raiders were able to narrow the lead to 7 points with one minute left, but the Vikings were able to bring the lead back t0 11 at 36-to-25 at the end of the third period. The Raiders were able to again chip away at the lead while Waverly tried to slow the tempo and burn the clock, and were within three points at 36-to-33 with 3:45 left in regulation. However, the Vikings showed patience and worked the ball around until they got a good shot, and continued to score. Sidney furiously tried to cut into the lead with three-point shots, but kept missing. Sidney was forced to foul, but the Vikings did a good job at the free throw line and kept the Raiders at bay. The game ended with Waverly taking the victory, 50-to-44, and earning their place in the State Tournament. Dickman led the Sidney offense with 16 points, and junior Micah Schneider had 12 points on four three-point hits. Head Coach Austin Lewis has done a tremendous job revitalizing the Red Raiders with a 17-and-10 record, a big improvement from 2020's 3-and-20 record and 2021's 12-and-12 mark. Sidney will lose leading scorer Sawyer Dickman to graduation, but will come back with a group of experienced and talented juniors looking to get the Red Raiders to the next level and earn a State Tournament bid next year.