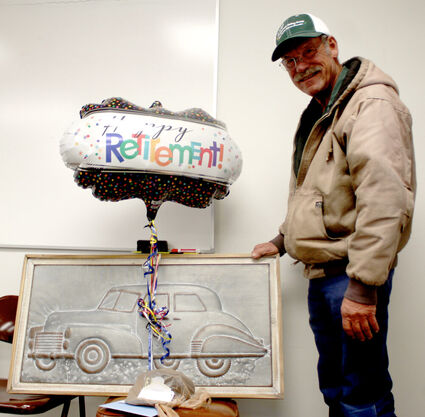 The shuffle of papers and discussion of company plans were put on hold as the meeting room was transformed into a reception area recognizing a retirement after 42 years of employment.

He grew up on a small acreage east of Chappell, but didn't consider himself a farmer. However, it spent much of his life helping farmers.

He came into the work relationship with the Co-op needing a job.

“I applied for a job. I was trained in mechanics,” he said March 3 during a celebration of his retirement.

He said he ran the tire truck and worked into maintaining vehicles. He started dispatching deliveries and graduated in duties from one job to the next. His early interest in life stayed with him while at the Co-op.

“I had interest in plant science,” he said.

With the help of numerous different classes he was able to move up to sales. He considers himself self-taught, educated but not college taught.

General Manager John Bender commends Duffield for his career with the Co-op.

He said Duffield's history with the Co-op is deeper than his time of employment. His dad worked at the Co-op as a propane manager.

Bender said it is not unusual for a Co-op employee to spend much of his working adult life at the facility.

His retirement plans are loose but will likely include working on vintage farm equipment.

“I'm kind of partial to firing up old tractors,” he said.