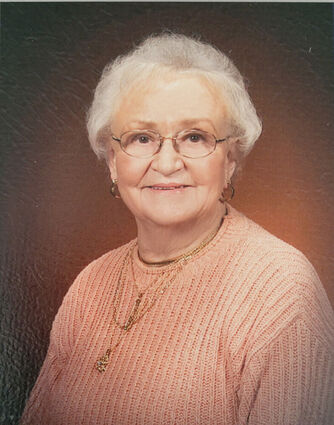 Rosella was born December 29, 1930 to Zella and Ferris Cottrell in Walthill, Nebraska. When Rosella was 12 years old, she and her brother Everett Eugene were adopted by their maternal grandparents, Everett and Lydia Martin of Walthill, Nebraska. She had a childhood dog named Lucky that followed her wherever she went. Everyone in town could easily find Rosella because Lucky would be waiting outside. Rosella graduated from the Walthill High School. She attended Wayne State College on scholarship and then moved to Omaha to work at Mutual Benefit of Omaha.

On May 19, 1951, Rosella married Lewis H. Mehling of Bancroft, Nebraska. To this union, four children were born: Lynn Marie, William Martin, Claire Louise and Charles Kent. Lew and Rosella spent two years living in Bancroft where Lew was employed at the First National Bank and then moved to Omaha where Lew became a National Bank Examiner working for the Comptroller of the Currency office of Kansas City. In 1955, the Mehlings moved from Omaha to Sidney where Lew was associated with the American National Bank of Sidney until his retirement in 1988.

After the Mehling children had left home for college, Rosella was employed at Memorial Health Center as an Accredited Records Technician for nine years. She served on the funeral lunch committee of her church for seven years. Her one main interest was her commitment to the P.E.O. Sisterhood. After serving many years as an officer at the local level, she also served as an officer for the State Chapter for seven years, the last served as the State President of the Nebraska State Chapter of the P.E.O. Sisterhood.

Following her years of service with the P.E.O. Sisterhood, Rosella was employed for seven years in the gift department at Cabela’s retail store on a part-time basis.

Rosella loved to cook and challenge herself by preparing new recipes. The holidays were always a treat for any visitors to her home as she loved to decorate and celebrate each holiday of the year. She enjoyed caring for her family and spending time with her grandchildren and great grandchildren.

Among her other interests were golf, bridge playing, and many various crafts including creating stained glass art and her own jewelry and cheering for the Huskers!