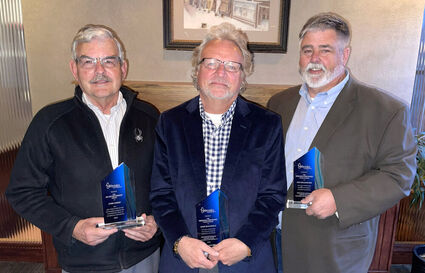 LINCOLN – Three individuals were recognized at the Nebraska Corn Board’s (NCB) 2022 awards dinner on March 17 in Lincoln. The annual awards event highlights outstanding contributions to the state’s corn industry. Each of the three recipients have long histories serving Nebraska agriculture.

Two recipients received the inaugural NCB Vision Award. The purpose of this recognition is to honor individuals, industry leaders, businesses or organizations that have gone above and beyond to help NCB achieve its vision, which is to enhance demand, add value and ensure sustainability.

Jon Hozfaster was the first recipient of the NCB Vision Award. A third-generation farmer from Paxton, Hozfaster grows corn, popcorn, alfalfa, wheat, soybeans, edible beans and operates a background feed yard. He served as the District 8 director of NCB from 2003 to 2018.

He also served on the National Corn Growers Association’s (NCGA) corn board for six years and provided valuable service to the Ethanol Action Team. Through this role, he was an instrumental leader in NCGA’s partnership with Growth Energy to establish E15 as the official racing fuel for NASCAR.

Holzfaster made significant contributions to agriculture at the local, national and international levels. Along with his family, Holzfaster helped position Western Nebraska as an innovative and progressive area, not only to farm and ranch in, but a place to build new value-added ag related businesses. He has taken his commitment to building new demand for corn and his knowledge of economic development to help establish a farmer cooperative to build an ethanol plant.

“Jon has made significant contributions to both the corn and ethanol sectors at the local and national levels,” said Andy Groskopf, secretary and treasurer of NCB and farmer from Scottsbluff. “His impact is lasting, too. He’s still well-known and respected at national meetings even though he’s no longer serving on the NCB or NCGA boards.”

David Buchholz was the second recipient of NCB’s Vision Award. Buchholz has been a long-time friend and ally of Nebraska’s agricultural industry. His advertising agency, David & Associates, was the first advertising agency NCB ever partnered with over 30 years ago. Through his visionary thinking and strategic marketing savvy, millions of people from around the world have been exposed to positive messages about corn and agriculture.

Buchholz helped NCB with countless campaigns and advertising initiatives throughout the years. A few highlights:

Strategic partnerships with influencers, such as Olympic bobsledder Curt Tomasevicz.

Helped refine the CornsTalk series into issue-based publications that were consumer-focused and easy to understand.

Helped bring ethanol to the national stage through the Big Ten Network.

“Dave was more than a contractor that worked for us but rather a trusted advisor or an extension of our staff,” said Brandon Hunnicutt, vice chairman of NCB and farmer from Giltner. “He had many ag-based clients, including NCGA, U.S. Grains Council, Nebraska Extension and others. This helped us because Dave truly understood agriculture and helped us put our best foot forward.”

The final recognition of the evening was the Ag Achievement Award. This honor, first presented in 1991, was designed to recognize outstanding and unselfish efforts to further the state’s corn industry. This year’s Ag Achievement Award was presented to Lynn Chrisp, a farmer from Hastings. In total, Chrisp has spent over 30 years serving corn farmers through state and national leadership roles.

At the national level, he most recently served as president and chairman of NCGA in 2018 and 2019 respectively. He was active on numerous NCGA action teams over the years and worked on several issues impacting corn farmers, such as global agricultural trade, production, stewardship, biotechnology, the Farm Bill and ethanol. His most recent work focused on ethanol’s role as a low carbon, high octane fuel, in which a bill was introduced into the U.S. House of Representatives.

On the local level, Chrisp became a member of the Nebraska Corn Growers Association (NeCGA) in 1988. He previously served as chairman of NeCGA’s government relations committee with oversight for state and national issues. He also was involved in the planning and implementation of NeCGA’s leadership program to Washington, D.C.  Chrisp was instrumental in leveraging the strengths of NCB and NeCGA to implement a more unified brand under Nebraska Corn.

“Lynn has been a constant in Nebraska’s corn industry for as long as I can remember,” said Jay Reiners, chairman of NCB and farmer from Juniata. “He was a major reason why I got involved in Nebraska’s corn industry. Through his encouragement and mentorship, I was able to take the next step and help advocate for our state’s farmers. I have long admired Lynn’s leadership and continue to look up to him.”

Each award winner was identified and selected by NCB.

The Nebraska Corn Board is funded through a producer checkoff investment of ½-cent-per-bushel checkoff on all corn marketed in the state and is managed by nine farmer directors.

The mission of the Nebraska Corn Board is to promote the value of corn by creating opportunities.