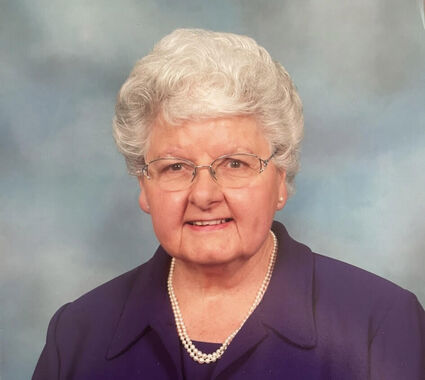 Memorials can be sent to The Urseline Sisters, 3115 Lexington Road, Louisville KY 40206 or St. Patrick’s Catholic Church, 1039 14th Street, Sidney NE 69162 in memory of Dorothy C. Treinen. Services will be recorded and available on our website for viewing. Friends may stop at the Gehrig-Stitt Chapel on Thursday, March 24 from 1-4:00 P.M.

You may view Dot’s Book of Memories, leave condolences, photos and stories at http://www.gehrigstittchapel.com. Gehrig-Stitt Chapel & Cremation Service, LLC is in charge of Dot’s care and funeral arrangements.

Dorothy Catherine (Fehringer) Treinen was born on November 20, 1925, in Peetz, Colorado to Clara (Wemhoff) and John F. Fehringer. Dot, as she came to be known, was raised on the family farm west of Peetz with her six brothers and six sisters as well as a large close-knit, extended family of cousins, aunts, and uncles.

Dot attended school in Peetz until her senior year, when, as was the custom in her family, she transferred to and graduated from St. Patrick’s Academy in 1943. She then gained employment at American National Bank as a teller and was proud of her ability to memorize all of the depositors’ signatures.

She married John N. Treinen on June 20, 1946. Together they raised six children and farmed on Sidney’s South Divide. In addition to helping to manage the financial operation of the farm and maintaining a warm and loving home, she also worked at St. Patrick’s in the school lunch program. In 1981, she and John moved into Sidney to enjoy retirement from farming and milking dairy cows.

After John’s unexpected death in August 1983, Dot became even more involved in St. Patrick’s parish by heading one of the work teams at the Rummage House and serving as co-chair of the Funeral Dinners committees. She also was a 50-year member of the Stateliners Extension Club. As much as she enjoyed these activities, her true joy was playing cards, especially bridge, with her many friends. She also loved cooking for her family and friends, and she made sure no one left her table hungry or without dessert.

Dot was able to maintain her independent living status until August 2021 when she was diagnosed with kidney cancer and was admitted to Davis Hospice Center in Cheyenne, Wyoming where she received the highest quality of care from the nursing staff until her death on March 17, 2022.