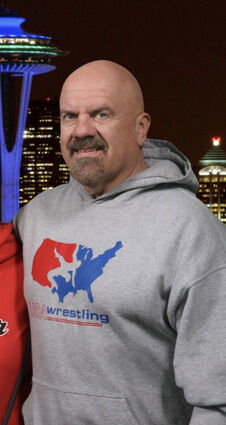 Saylor will be inducted on June 10 at the NSWCA Banquet at Boarders Inn and Suites in Grand Island. Saylor has many ties to Sidney, with his father Mel being Sidney's Mayor back in the 1990's. Saylor's officiating resume contains over 18,000 matches and 455 Duals and Tournaments, lasting 31 years.

He needed to retire after knee problems made it impossible to officiate, and now looks back upon his career officiating and being a staple of the Nebraska wrestling community.

After his wrestling career in High School and college, Saylor coached wrestling at Kearney High School. He then started officiating matches, and after his first, starting writing down questions and situations that needed to be clarified or resolved.

He now has two huge books full of wrestling questions and scenarios that has been invaluable to wrestling officials. Saylor was inducted into the Huskerland Hall of Fame back in 2013, and comes from a family of wrestlers, including his brothers Steve and Jeff.

Saylor has been married for 37 years to his wife, Cindy, and has a son and a daughter. His son runs Saylor Screen Printing in Kearney while his daughter is an architect in Seattle. Saylor worked in the farming industry for many years, in sales.

Saylor talked about officiating a number of matches of legendary American Wrestler Rulan Gardner, as well as a match that turned out memorable in many ways. In 2010, Saylor remembers vividly a match in the Heartbreak Round where an underdog wrestler from Fairbury beat his favored opponent from wrestling-powerhouse Aurora. It was an outstanding match, and the Fairbury wrestler was able to pull out the win in the last moment.

Dave Saylor counts among his prized possessions a 2 by 3 foot shadow box containing the singlet Horky wore and a picture of the win over the Aurora wrestler while Saylor officiates.

Saylor currently resides in Kearney, but often reminisces about his time in Sidney.

“I miss the people and beautiful scenery of the Sidney area. And I really miss Octoberfest”, he laughed.

On June 10th Dave Saylor's passion will be rewarded with his induction into the NSWCA Hall of Fame, but the sport of wrestling has already gifted him a lifetime of memories and moments far beyond his dreams.