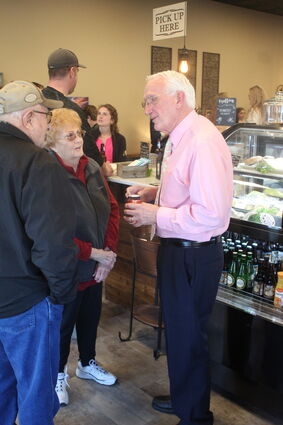 Beans and Steams Coffee House was crowded with well-wishers, family, friends and former patients as Dr. Clinton Dorwart officially hung up his stethoscope, appointment book and is not renewing his license.

The scene was busy with congratulatory wishes, sharing of memories and toasts to a fun and relaxing retirement. After 41 years of serving the area, it is likely his supporters are patients, and children of patients.

Earlier this year, it was announced that Dr. Dorwart recently retired from practice in Sidney. Friday he said he returned to practice a few months more because of the need in the area.

“I just felt I needed to keep helping,” he said.

This time, however. There isn't any turning back.

Looking back at the celebration in the restaurant, he had few words, except to thank the efforts of the doctors who organized the reception.

His dad was a general practitioner in Sidney until his death in 1978.

Ultimately, his goal is to “throw the clock away,” and live life on his terms. That may take a little time; He has a full schedule until October, including visiting Yellowstone National Park.

“We could not be prouder of all the work you've done throughout your 40 year career in Sidney. The dedication to the city, the perseverance through difficult times and your unwavering insistence on doing the right thing even when it's not the easy thing are all things we look up to,” said son Matthew Dorwart earlier this year.

He was born in Sidney. One might say he was born into medicine, and then passed on the legacy to his children. Three of his children continued the practice of medicine in the family. He graduated from St. Pats High School in Sidney, then went to Creighton University for his undergraduate degree and joined Army ROTC during college. He was sent to Vietnam during the height of the Vietnam War, serving there from 1969-1970.

He had a series of other jobs prior to starting medical school at Creighton. He met his wife in Omaha where she was a nurse. They got married two days after his medical school graduation.

After completing Family Medicine residency in Waterloo, Iowa, the Dorwarts moved to Sidney in 1981 where they have lived since.

“He has taken care of multiple generations of Sidney residents. He has delivered countless babies and then delivered those people’s children,” son Matt Dorwart said in January.

He will definitely be remembered by his patients as someone who “told them like it was.” He was and is never someone who would sugar coat something. He is said to be intimidating at first meeting, but once you get to know him his gruff exterior gives way to a softer inside. Although he stepped back from full time practice five years ago, he continued to work in the Chappell medical clinic. He now decided that it was time to retire completely.

His children Bill, Michelle, and Matt followed in his footsteps and became Family  Medicine doctors as well.  His third son, Dan, lives in Sidney with his family and is a teacher at Sidney Middle School.