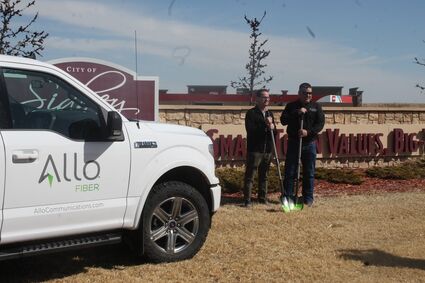 On April 3, Sidney City Manager David Scott and Colin Murphy, lead constructionist for ALLO Communications, met at the corner of Fort Sidney Road and 11th Avenue for a ceremonial groundbreaking.

ALLO Communications is working to establish a fiber optic system in the Sidney area. The company has an office on Illinois Street, and is actively preparing the network for the first Sidney customers. According to the company's website, work begins well before ALLO becomes a familiar name.

It started as a desire for better service, and 19 years later is a company bringing fiber network service to rural communities. In November 2021, the Sidney area was included in the ALLO Communications network. ALLO Communications announced on November 29, 2021 a “fiber-to-the-premise project offering 10 gigabit bandwidth in Sidney. The press release announced ALLO will begin construction in Spring of 2022.

In 2003, ALLO Communications was formed in Imperial. It started with the vision, the realization, that customers deserved more from communication providers. The company's first customers were their neighbors, but quickly expanded. By 2005, ALLO had its first fiber communities, the Scottsbluff and Gering business districts. Five years later, ALLO launched its first fiber-optic television service, and a year later Ogallala became ALLO's fifth fiber town.

The average U.S. Internet speed in 2013 was reported at 10 Mbps. That same year, ALLO debuts GIG (1,000 Mbps) internet service. ALLO was acquired by Nelnet in 2015, providing the capital to expand into Lincoln.

In 2017, the company had expanded to more than 500 employees, and the following year added Hastings and the City of Fort Morgan (Colorado) to its client list. The list continues to expand, including Wayne, Fremont, Valentine and Columbus, as well as Greeley and Hudson, Colo., and Lake Havasu City, Ariz. So far this year, the list is growing to include projects in Sidney, Ashland, Seward, Milford and York, and Kingman, Ariz.

The company is lead by Brad Moline, president, and Allison O'Neal, vice president of customer operations. Moline hold a degree in Business Administration from the University of Nebraska and held several senior positions with organizations that were focused on finance and business growth prior to moving his family to Nebraska. O'Neil has a Bachelor of Business Administration from the University of Nebraska-Lincoln. She is a member of the original ALLO team, starting her career there in 2004. She oversees every step of the customer experience.