Drought in Nebraska Causing Concern as Farmers Prepare for Planting 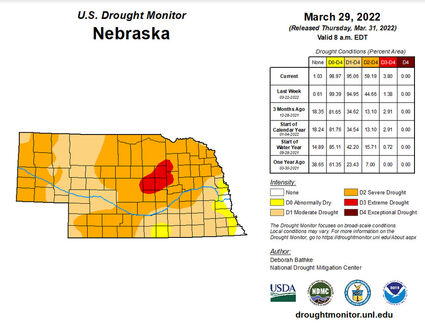 Galen Roebke, Seward farmer, said the current drought timeline makes him wonder if it’s true. He said he’s starting to notice how dry his farm is after not having drought be a concern the past few years.

“You sometimes think about those things, that we might have a prolonged dry time,” Roebke said. “Our last few years, we’ve been blessed with adequate rainfall. Sometimes, you almost think it’s too good to last.”

Nebraska is in the midst of a drought that started almost two years ago, in June 2020. A previous drought, which lasted two years, ended in late 2014. While there was some relief in the spring and early summer months of 2021, it has since worsened. All but 1 percent of the state is experiencing some level of drought and a staggering 59% of the state is in a severe drought.

The worst of it is centered in central Nebraska in Wheeler, Greeley and Valley counties, which have consistently missed out on precipitation in the current weather pattern and are experiencing extreme drought conditions as a result.

With the spring planting season on the horizon, many farmers are worried about the current dryness and the long-term outlook.

“It is a concern because some of the decisions you might make now are going to affect how things are down the line,” Roebke said. “Nobody can see the future perfectly but you kind of have to make your best guess on a few things.”

Roebke is a dry land farmer, meaning he has no irrigation for his crops and has to consider that every year. For example, he has lately been ordering seed that is more drought resistant and plans to do so again this year.

Roebke also said one of the biggest things for farmers to consider is how thick to plant the crops.

In a drought, it’s ideal for the field to be less populated so there’s more moisture available for each plant. On the flip side, if a farmer plants the population a little lower and does get precipitation, they regret their earlier decision because they lost out on potential income.

He also said other farmers are considering their level of crop insurance.

“Some people I’ve talked to are going up a level,” Roebke said. “Instead of insuring 75 percent of their crop, they’re going to insure 80 percent or 85 percent just because we might be relying on crop insurance.”

After the release of a new U.S. Drought Monitor map on March 29, state officials were concerned enough by the increase in drought levels to call an April 8 public meeting of the Climate Action and Response Committee. The committee, which assesses climate conditions and reports to the governor, includes representatives of the Nebraska Emergency Management Agency, the U.S. Drought and Mitigation Center, the Nebraska Department of Natural Resources, UNL Cooperative Extension, UNL’s Conservation and Survey Division.

“My thought process of calling the meeting was just to get everyone in the same room,” said Cicely Wardyn, assistant director of the Nebraska Department of Agriculture and committee chair. “It’s a good excuse for me to call everyone together and just kind of go through what each agency or organization is looking at, what their concerns are for this upcoming growing season and what are some things that we should be thinking of doing now like preparation steps or mitigation steps.”

Wardyn said that some of the members of the climate committee had expressed their growing concerns over the drought. She also said there hasn’t been any farmers who have reached out directly to her, but she knows they’re thinking about it, too.

Despite the recent rains, the long-term outlook doesn’t look promising. 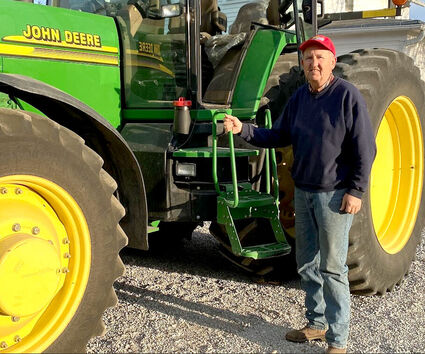 Brian Fuchs, a climatologist with the U.S. Drought and Mitigation Center, said that the models and data for the seasonal outlook have the drought still holding on through the end of June west of the Missouri River. He also said it would take a couple of wet months in a row to change the drought.

“It’s not too bullish in April,” Fuchs said. “I think a lot of that has to do with just how dry it has been up to this point, that even a wet April probably isn’t gonna change the drought situation a whole lot. We’d have to continue that into May.

“The last couple of years, we haven’t had a lot of drought issues to talk about, but I think this year will be a little bit different," he said. "Everything is leaning toward that we’re going to be dealing with some drought in our state at least through the summer.”