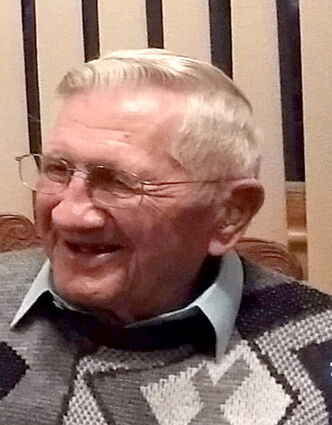 George Narjes, 94, of rural Lodgepole went to be with his Heavenly Father Friday morning, April 8, 2022 at the Sidney Regional Medical Center- Extended Care.

Funeral Services were held at 10:30 a.m. Monday, April 11, 2022 at the Weyerts Immanuel Lutheran Church with Pastor Bud Gillespie officiating.  Burial will follow in the Weyerts Cemetery.

The funeral service will be streamed live via the Holechek-Bondegard Facebook page (https://www.facebook.com/hbfunerals) and available to watch after the service.

Memorials in George’s name can be made to the Weyerts Immanuel Lutheran Church or the Sullivan Hills Camp.

Holechek-Bondegard Funeral Homes and Cremations is serving the Narjes family.

George Henry Narjes was born in the Pratt Kansas Hospital to Henry and Minnie (Hoeme) Narjes on February 22,1928. He was baptized on April 1, 1928 by Pastor Hilst at St. Paul Lutheran Church Natrona, Kansas, attended St. Paul Lutheran Elementary School and was confirmed by Pastor Hilst at St. Paul on March 29, 1942. George’s mother passed away when George was 2 years old. George’s father raised his own three children and three nephews who had lost both of their parents. Young George was lovingly brought up by his father, teen-age sisters and the care of extended family. George graduated from St. John’s Lutheran Academy, Winfield, Kansas in 1946.

George farmed with his father in both Kansas and Nebraska, moving from Kansas to Nebraska before he was drafted into the Army. He served in Germany from January 25,1951 through December 29, 1952 during the Korean War. After returning to Nebraska, George met Geneva (Weyerts) at Immanuel (Weyerts) Lutheran Church. They were married at Immanuel on November 7, 1954. The couple farmed and raised their three children in the Weyerts community. George recognized the full worth of helping his neighbors. He used his time and talents to help individuals and to serve in his community. He was an active church member, serving on Council, teaching Sunday school, and helped maintain the building and grounds. He was on the District #32 School Board, the Lodgepole Elevator Co-op Board, the Lodgepole First State Bank Board and the Sullivan Hills Church Camp Board. He enjoyed helping with Sullivan Hills construction projects. Throughout his life, George enjoyed playing with the newest electrical inventions. He repaired televisions, was a self-taught electrician who wired rural homes and businesses in Cheyenne county, purchased one of the first Commodore Vic 20 computers and at the age of 94 loved using his IPad to Facetime with family, check Facebook and the weather, watch videos and play solitaire.

He was preceded in death by his parents, his sisters Hulda Wiese and Lillian Krusemark and his step-mother, Marie Narjes.