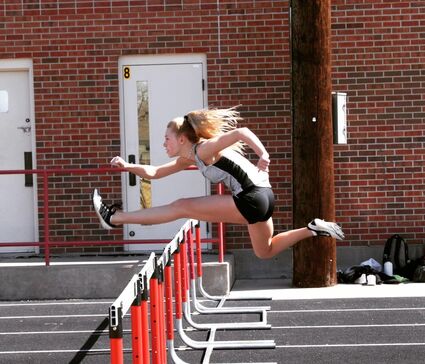 Sidney's Red Raider Track and Field teams traveled to Gothenburg on Thursday to compete in the annual Dutch Zorn Invitational, and the Sidney boys bounced back from being bested for top honors by a half-point by Chadron at the Mitchell Invitational last Saturday.

The Sidney boys won six events and bested McCook by one point to take first place, 115 points to 114 points, followed by Lexington in third with 102 points. The Lady Raiders off of their win at Mitchell last week placed third with 75 points, behind first place McCook with 140 points and second place Ogallala with 86 points.

For the girls, sophomore Chloe Ahrens won the 100 Meter Hurdles with a time of 15.58 and the 300 Meter Hurdles with a time of 49.14. The 4X800 Meter Relay team (Rheo Dykstra, Jenju Peters, Lydia Peters, Talissa Tanquary) and the SMR 200-200-400-800 Meter Relay team (Karsyn Leeleing, Gabrielle Fortner, Lydia Peters, Talissa Tanquary) each placed second. Sophomore Karsyn Leeling won the High Jump clearing 5' 03” and placed second in the Long Jump with a distance of 16' 05”. Junior Gabrielle Fortner placed second in the Triple Jump with a distance of 32' 09”.

The Sidney varsity boy's squad has now won three of four Meets with one second place showing to start the season, while the varsity girl's have won one, placed third twice and placed second once. On Friday, April 22, Sidney will split their squads for two different meets; the Lexington Don Bader Invitational and the Pine Bluffs Invite.