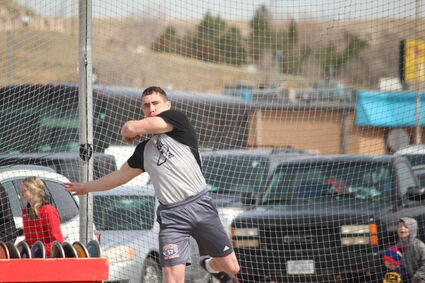 Sidney’s Red Raider Boy’s Track and Field team continued their successful season last week with two wins, at the Best in the West Classic in Scottsbluff Tuesday, and at the Western Conference Meet in Sidney on Friday.

Sidney continued their strong showings in the running events and relays, earning 19 total medals at the Best in the West, and following that effort up with 27 medals, nine of them gold, on Friday.

Perfect weather and temperature conditions helped produce outstanding performances by the boys at Best in the West, including many record-setting performances. Senior Mitch Deer won the 400 Meters with a time of 49.18, a personal record.

Both heights were Season Records for the jumpers. Dickman said after the competition, “I was feeling really good and the conditions were perfect for jumping, so I wasn’t too surprised by the outcome.” Junior Cameron Leeling placed second in the Long Jump with a distance of 20’ 01.75”.

The girl’s team earned no gold medals at Best in the West, but still had outstanding performances. Sophomore Karsyn Leeling placed second in both the High Jump and Long Jump, and junior Rheagan Stanley placed second in the Pole Vault.

Friday’s Western Conference Meet in Sidney had similar conditions, although a bit more breezy, especially later in the day. 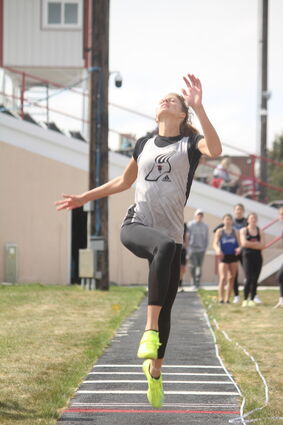 The girls squad was also able to take home a batch of gold medals, with sophomore Talissa Tanquary winning the 400 Meters at 1:02.58, a season record, and senior Lydia Peters winning the 3200 Meters at 13:39.83, also a season record. Sophomore Karysn Leeling won the High Jump and the Long Jump, and junior Rheagan Stanley won the Pole Vault.