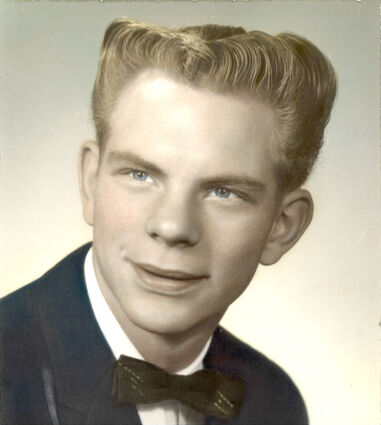 Friends may stop at the Gehrig-Stitt Chapel on Tuesday from 1-6:00 P.M.

You may view Larry’s Book of Memories, leave condolences, photos and stories at http://www.gehrigstittchapel.com.

He was born on January 19, 1941 to Helen Fairchild of the Fairchild Ranch near Belmar, NE. When Lake McConaughy flooded out the original headquarters shortly after his birth, he moved in with his grandparents, Clarence & Etta Fairchild who adopted him in the early 1950’s.

During Clarence’s terminal fight with bone cancer, Larry stayed with his aunt and uncle Pearl and Don Henrickson in Broadwater where he graduated from Broadwater High School in 1960. He continued to help at his grandfather’s ranch as well as his uncles’ ranches at Lewellen and Broadwater, all the while refining his mechanical and racing skills. His first engine makeover was on a ’50 Mercury Monterey and he followed it with successes on local dirt tracks and the Julesburg, CO dragstrip. Even his ranch wagon Jeep truck would get supplies back to the home place faster than the speed limits allowed.

Larry was diagnosed with Huntington’s chorea, a hereditary disease that would eventually render him unable to drive, walk, or even communicate. With this prognosis in mind, he sold his ’64 SS Impala with the 409 4-speed that the Beach Boys wrote a song about. He also broke off his engagement and determined not to have a family to stop the rare disorder from continuing on in his line. Despite all this, he maintained a sunny disposition. When it was revealed roughly a decade ago that the diagnosis had been incorrect; he actually had a rare form of muscular dystrophy/multiple sclerosis, Larry just grinned and went with the new medicines provided.

Larry was preceded in death by his parents, grandparents, his aunt Pearl and uncle Don Henrickson, as well as cousins and foster twin brothers raised by the Fairchilds, Allen & Austin (Ody) Knoell and their wives. He is survived by Allen’s daughter Renee Jasgur of Running Springs, CA, and Ody’s daughters Bunny McComb of Cortez, CO and Jodi Knoell of Rawlins,

Larry will be missed and remembered by his loving Extended Care family.