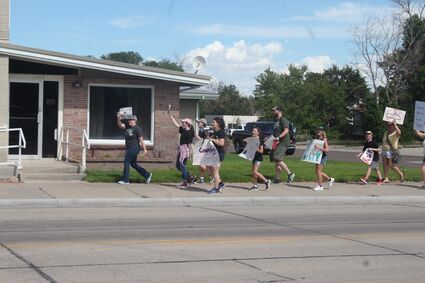 While much of Sidney was preparing for the official fireworks display Sunday night and backyard barbecues were heating, a group of people made their voices known from Legion Park north to Illinois Street and back.

The primary chant, call to action, heard in the march was “Our Body, Our Choice.”

The march was organized by Kelsey Hauge of Sidney.

“We marched today (Sunday, July 3) in support of women's rights, after the overturn of Roe vs Wade,” Hauge said after the march.

The march included youth to senior adults, men and women. The event was organized as a peaceful protest. During the afternoon, people were seen offering bottled water to both supporters and opponents of the protest.

“We believe the women's right are human rights,” she said.

She said abortion is not one issue or the other. However it is, according to Hauge, about a woman's health.

“Abortion is basic and sometimes necessary for health care,” she said.

She said every person should have “full body autonomy.” 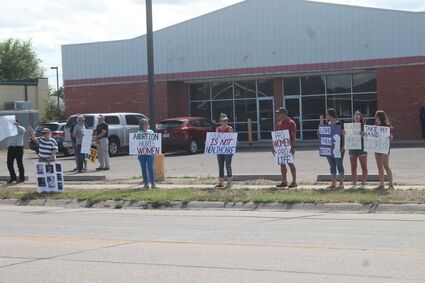 She said she doesn't feel women want to have abortions; they want to have the option when necessary. She cited an incident in Ohio when a 10-year-old girl was assaulted and became pregnant. Because of Ohio's strict law, she could not abort it.

She added religious beliefs cannot be forced on another person.

She said Sunday's event was locally organized . However, there is a national effort.

She said they (protesters) don't want abortions into the third trimester.

“They're pinning us against each other,” she said of the media.

When asked about the constitutionality, and if it should be a state's rights vs national, she said Thomas Jefferson favored a review of the constitution in 20-year cycles. The proposal was written in an 1816 letter to Virginia lawyer Samuel Kercheval.

The United States has not had a Constitutional Convention since the Constitution was approved.