AED Proves It's Worth 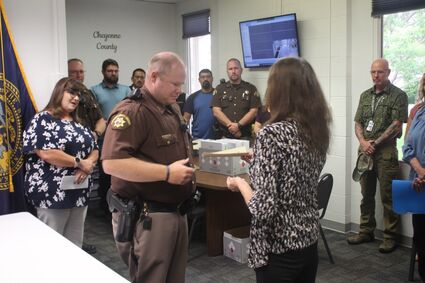 For some people, the attraction to the rural lifestyle is the distance between you and your neighbors. Measuring distance by time has a unique relevance.

The disadvantage to the rural lifestyle is the same: distance between neighbors... or help when something suddenly goes wrong.

“About a year ago, the Helmsley Trust awarded us a grant” for Automated Electronic Defibrillators (AED) to be installed in patrol cars, Sheriff Adam Frerichs said. The grant was part of $6.4 million awarded to the Nebraska Department of Health and Human Services (DHHS) for the distribution of 2,500 AEDs to law enforcement agencies throughout the state.

AEDs are portable devices used to diagnose and treat sudden cardiac arrest through defibrillation, which re-establishes an effective heart rhythm. The AEDs selected for distribution feature technology that reduces pauses during CPR and, therefore, improves blood circulation and odds of survival. These devices can also use Wi-Fi to send near real-time information about a patient’s heart to emergency services, thus improving post-event evaluation and care.

Tuesday's meeting was a big thank-you from the Sheriff's Department to the Commissioners, from a local resident whose life was saved by having an AED in a patrol car to those involved in securing the device.

“Today we're here to celebrate we had a save,” Frerichs said.

Denise Nelson was working at ReCircled, located at the former Cabela's Distribution Center.

“I just had lunch, went back to work,” Nelson said.

On her way back to work, she developed some unusual physical discomfort.

“I thought it was indigestion,” she said.

She sought pickle juice as a remedy for the indigestion when things suddenly changed.

“That was the last I remember,” she said.

Authorities were called and Cheyenne County Sheriff's Department Deputy Zach Goodrich responded code, lights and siren. The information he received was of a medical call with CPR in progress. While enroute, he received an update that CPR was stopped when she started breathing. A moment later, CPR began again.

Deputy Goodrich arrived at ReCircled with an AED unit in-hand. He met one of Nelson's coworkers who assisted Goodrich. Goodrich said clothes were cut off according to medical practice and the AED pads were placed. After the initial shock, they continued CPR until she started breathing.

In the presentation during the commissioners meeting, Paramedic Tony Balandran commended Goodrich for his response.

“If not for Zach, she probably wouldn't be here,” Balandran said. “Zach did all the work on this one. All credit goes to him.”

Nelson said she was flown by Flight for Life to a hospital in Loveland, Co., where she was stabilized, two stints were inserted and 95 percent blockage was cleared. She said she wasn't aware of Deputy Goodrich's role until she talked with medical personnel after the incident.

“I personally came down and thanked Officer Goodrich,” she said.

After the commissioners meeting last week, she still struggled to express her thanks to Deputy Goodrich.

“It's hard to find words to explain it,” she said.

Goodrich said AEDs, and the required training, with basic first aid, is necessary in rural counties.

“I think every patrol car should have an AED,” he said. “They're super explanatory.”

He said heart disease is a leading cause of death.

In receiving the grant for the AEDs, Tim Wilson, program director for the DHHS Office of Emergency Health System and a licensed paramedic said first responders in Nebraska often have great distances to travel to an incident. He said having an AED ensures those who arrive before Emergency Medical Services (EMS) can give patients a better chance of survival.