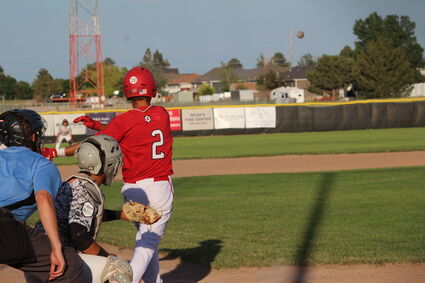 Sidney hosted the Nebraska American Legion B7 Area Junior Tournament over the weekend, and play will end on Tuesday in a championship game that the Sidney Juniors can participate in if they can get past Chadron on Monday night.

The Juniors have had their ups and downs throughout the season, but chose the District Tournament to play some of their best baseball of the season. Sidney started the opening round of tournament on Friday with a matchup against the Ogallala Junior AIA 16U team . Rhyder Bane started the game and went the entire way, giving up four runs but shutting down the Ogallala offense when the Sidney squad needed to get out of an inning.

The teams battled to a stalemate early on until Sidney’s Anderson Smelley singled to left field to lead off the third inning. Reid Fiscus brought him home with a two-out single to give Sidney a 1-to-0 lead. But Ogallala answered back in the top of the fourth, taking advantage of a Sidney error to plate two runs. With the bases loaded and one out, third baseman Kyle Jaggers scooped up a ground ball and fired it home to tally the second out, but Sidney catcher Connor Hurt was off the mark throwing to first base trying for the inning-ending double play. The overthrow enabled Ogallala to score their two runs to take a lead.

Hurt redeemed himself in the bottom of the fourth with a lead-off double to left field and was followed by Zech Roggasch reaching first on an error by the Ogallala second baseman. However, the potential big inning fizzled when Hurt was doubled off of second base on a line drive by Patrick McCartney. Sidney did cash in one run to tie the game when Anderson Smelley drilled a double to left, bringing Roggasch all the way around from first base to score. Sidney was able to grab a 3-to-2 lead in the sixth inning when Hurt laced a triple to center field, then scored from third on a sacrifice fly to center field by Smelley. Ogallala’s Blake Robb re-tied the game in the top of the seventh with a bases loaded single. Sidney left the bases loaded without scoring in the bottom of the seventh to push the game into extra innings.

Ogallala’s Josh Christensen led off the top of the eighth inning with a double to left field, then advanced to third on a wild pitch and scored on a sacrifice fly by Kaode Adams-Brewer. With Sidney down 4-to-3 in the bottom of the eight, McCartney got the Sidney squad going by reaching base on an error by the third baseman. Smelley then ground into a fielder’s choice to eliminate McCartney off the paths. Zac McGuire then popped out to second base for the second out of the inning. Kyle Jaggers was then hit by a pitch, and then he and Smelley were able to advance to second and third on a wild pitch. Landon Riddle grounded to first base, and Ogallala’s Charlie Nielsen misplayed the ball, allowing the winning run to cross the plate, giving Sidney the 5-to-4 win.

Sidney then advanced to face the number-one seed, Alliance. The Sidney boys have had no success against their northern rivals in four tries this season, but jumped out to an early lead when Reid Fiscus was able to get on base via error, then stole second and scored scored on a two-out double to center field by Connor Hurt. Hurt started the game for Sidney on the mound, and after hitting a batter with two outs, pitched out of trouble by inducing a foul out to get Sidney out of the inning. Rhyder Bane led off for Sidney and got on base via error, then advanced to second on a wild pitch, then to third on a passed ball. Patrick McCartney then singled to right to drive Bane home. Sidney scored two more runs in the inning on a Fiscus single to left field and another single to left field by Landon Riddle. Sidney held a 4-to-0 lead against the top-seeded Alliance team.

Alliance finally went to work in the the third inning, plating three runs on two hits to narrow the Sidney lead to 4-to-3. Alliance power pitcher Kaden Ferguson entered the game in the fourth inning, and shut down the Sidney offense the rest of the way. Alliance added three more runs in the fifth inning on four hits. The game ended with a 6-to-4 win for Alliance, with Ferguson earning the win in relief. Hurt took the loss for Sidney, going 5.2 innings and giving up six runs on nine hits.

Sidney next faced Ogallala again on Sunday evening, with the game delayed about an hour due to lightning in the area. The game started with a gentle rain falling, which lasted for the entire first inning. And the first inning was a long one, with Patrick McCartney starting the game for Sidney. McCartney retired the first batter on a fly out to center filed, then issued a four-pitch walk followed by a seeing-eye pop fly that fell between shortstop and left field. But the runner on first had to wait on the pop fly, and he was thrown out at second for the second out of the inning. McCartney then induced a foul out to get out of the top of the first inning.

Ogallala started Brayden Heilman on the mound, and it quickly looked like Heilman was in for big trouble against the Sidney Juniors. Heilman had difficulty finding the plate, and when he did his slow pitches had very little movement, and the Sidney batters teed-off on the offerings. The Sidney line up delivered line-drive base hit after line drive base hit, until they finally recorded their first out with a 5-to-0 lead. Heilman was finally able to get out of the inning, but Sidney had put up six runs. 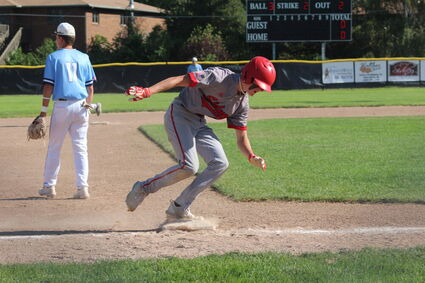 The rain finally tapered off at the end of the first inning, and McCartney went back to work, and struck out the first batter, got the second batter to line out to shortstop, then struck out the third batter to retire the side in order. Sidney kept up the offense in the second, with Reid Fiscus reaching first base on a misplayed ball by the third baseman, followed by a steal of second base, and then took third on a passed ball. Connor Hurt drew a walk and caught the Ogallala defense napping, breaking away from first base and making it to second before a throw could be made. With runners on second and third, Andersen Smelley drilled a single to left field, scoring two runs, but was thrown out at second base trying to extend the single into a double. After Heilman walked Rhyder Bane, he was replaced on the mound by Charlie Nielsen. The change helped little, as McCartney was able to drive in a run on a double to center field, then Landon Riddle singled to score another run. With the bases loaded, Reid Fiscus hit a towering fly deep to left field, but the Ogallala defender was able to make a great running catch to save at least two runs and end the inning. Sidney plated four more runs, and had a commanding 10-to-0 lead.

Ogallala was eventually able to plate a few runs, but Sidney was in complete command of the contest, which ended in a 15-to-5 victory for Sidney. With the win, Sidney advanced to play Chadron on Monday, with the winner facing off in the championship game against Alliance on Tuesday.