Ride for the Fallen 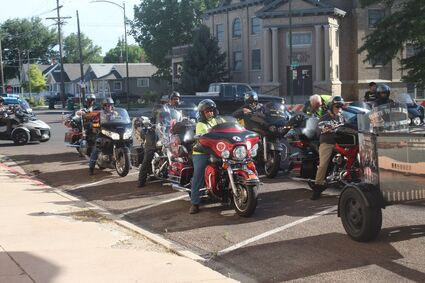 Saturday evening, a rumble of motorcycles entered Sidney. The bikers entered the county from the west, carrying with them a torch, a flame in honor of fallen soldiers. Their overnight stay was at the Sidney Elks Lodge.

Warren Williamson, executive director of Tribute to Fallen Soldiers, addressed the crowd upon stopping at the Elks. He said the ride from Oregon to Washington, D.C., is in honor of soldiers who did not return home. The ride began July 9 in Eugene, Ore., and is expected to arrive in Arlington, Virginia on Aug. 7. Sidney was the eighth stop on the ride.

The ride includes an eternal flame escorted by the bikers and an RV. Along the route, the riders stop and Gold Star families in honor of those they have lost in the line of duty.

"Denise Rockwood Anjanice lost her son Chris Sawyer in 2018 and it was our promise to Denise that when we meet this journey that we would garden honor and protect memorial flame just like we would if we were escorting her son" Williamson said.

and that’s with the eternal flame means to all of us represents the spirit to sacrifice the service of our phone service member so we take great pride in saluting it and playing amazing grace when we start we play amazing Grace movie we visit a gold star family.

“We take great pride in going to a fall soldier's home,” Williamson said.

He said one of the greatest fears of a Gold Star family is their fallen family member will be forgotten.

“it means a lot to us so the flame will remain burning for 30 consecutive days as we make our way to Arlington National Cemetery. The ride will end on Sunday, August 7 at Arlington all of us will escort the flame inside of Arlington,” he said.

“At the closing ceremony, the memorial bell will be rung 68 times for all 68 service members that were all in on this journey. This is our 13th year doing his mission,” Williamson said.

Each route varies with the intent of stopping to meet with Gold Star Families. Williamson said next year's ride will likely be later in the year and through the southern states.

Saturday's stop included a prime rib dinner at the Elks Lodge, showers were available at the Cheyenne County Community Center, and the night ended with bikers bunking down for the night in the Elks Lodge.

Homes were offered for riders to clean up and to do laundry. 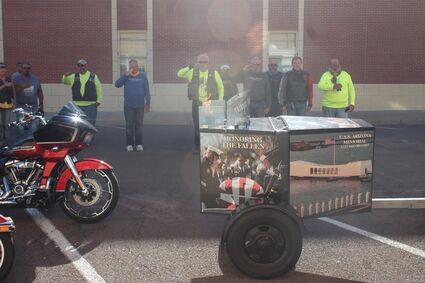 “We just had lunch with the governor of Wyoming and his wife Mark Gordon and Jenny. We spent 2 1/2 hours there at the mansion and we owner to two phone service members there at lunch and their names are up on a graphic as well but we are so grateful that you’ve allowed us to spend the night here and be part of your lodge we couldn’t do this mission if it were for partners like you. Thirty days is a long time and certainly we’re just a small 501(c)(3) so we can afford to stay in hotels every night nor would we want to because I think it’s disrespectful to go to the torch to be in a hotel parking lot we would much rather it be here at an organization like the Elks which pays great respect to our veterans.” Williamson said.

“It is our great honor you to host this event. Tank you for reaching out to us,” said Sidney Elks Lodge Exalted Ruler Erin Huddleston.

The Tribute to Fallen Soldiers started in 2009 and is a 501(c)3. For more information, please contact Executive Director Warren Williamson: [email protected], or